Look out for SteamHide, an emerging malware that disguises itself inside profile images on the gaming platform Steam, which researchers think is being developed for a wide-scale campaign.

The Steam platform merely serves as a vehicle which hosts the malicious file, according to research from G Data: “The heavy lifting in the shape of downloading, unpacking and executing a malicious payload fetched by the loader is handled by an external component, which accesses the malicious profile image on one Steam profile. This external payload can be distributed via crafted emails to compromised websites.”

The technique is called steganography and it’s not new — but Steam profiles being used as attacker-controlled hosting sites, is.

“While hiding malware in an image file’s metadata is not a new phenomenon, using a gaming platform such as Steam is previously unheard of,” G Data analyst Karsteen Hahn said about SteamHide in a new disclosure report, which builds on the original find by @miltinh0c on Twitter:

Just found malware being hosted on a steam profile inside an image! That's the first time I see someting like that @malwrhunterteam pic.twitter.com/HclAQz4nZ9

The malware downloader is hiding in the Steam profile image’s metadata, specifically in the International Color Consortium (ICC) profile, a standardized set of data to control color output for printing. Attackers hide their malware in benign images commonly shared online, including memes like “blinking white guy” used in the G Data analysis example. 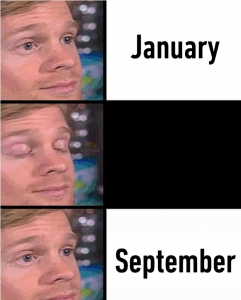 “The low-quality image shows three frames of the ‘white guy blinking’ meme alongside the words January, a black screen, and September,” Hahn added.

Victims of the malware don’t have to be on Steam or have any gaming platform installed, G Data’s researchers found. The profile image data only hosts the malware — to make it onto a victim’s machine, it must be fetched by a loader that’s been loaded onto a compromised device, the report explained.

Attackers Have Big Plans for SteamHide

Once executed on a victim machine, the malware terminates any security protections and checks for administration rights, the researchers found, then copies itself to “LOCALAPPDATA” folder and persists by creating a key in a registry that G Data identified as “\Software\Microsoft\Windows\CurrentVersion\Run\BroMal.”

For now, that’s all it does. But G Data said the developers of SteamHide have hidden tools inside their malware that aren’t currently being used, but could be dangerous later; including checking if Teams is installed on the infected machine, and a method stub named “ChangeHash” that indicates developers are working on increasingly complex iterations of the existing malware. There’s also a tool that enables the malware to send and receive commands over Twitter.

There could be new versions soon: Updating the malware only requires uploading a new profile pic.

“I am confident that we will see this malware emerge soon in the wild just like it happened with other in-development families that we covered, e.g., StrRAT and SectopRAT,” according to researchers.

It’s hard to say how easy the malware and attacker-controlled profiles would be to root out: Steam’s most recent data said the platform has more than 20 million users playing games, including popular titles like Counter-Strike: Global Offensive, Dota 2 and Apex Legends. Steam’s parent company Valve hasn’t responded to Threatpost’s request for comment on SteamHide.

This isn’t the first time Steam has been hit with cybersecurity issues. For instance, last December, Steam had to fix critical bugs that allowed a remote attacker to crash another player’s game, take over the computer and hijack all the computers connected to a third-party server.

This article was updated at 9 a.m. on June 11, 2021 to add clarity around how Steam is being used by cybercriminals.