The hack comes on the heels of the PewDiePie-supporting printer attacks over the weekend.

A webpage owned by the Wall Street Journal was hacked on Monday, in an attempt to promote YouTube celebrity “PewDiePie.”

The incident comes on the heels of a separate hack relating to the Swedish YouTuber, comedian and video game commentator, whose given name is Felix Kjellberg. Over the weekend, a hacking group claimed that they hijacked hundreds of thousands of printers globally to print pamphlets promoting PewDiePie.

The hacked Wall Street Journal-owned webpage, tweeted out by PewDiePie himself, was a short note titled “WallStreet Journal Public Apology to PewDiePie.” The webpage was not affiliated with the WSJ’s newsroom, but instead an arm of its advertising unit.

The hack comes as PewDiePie is currently going head-to-head with T-Series, an Indian music record label and film company, for the top YouTube spot. Both YouTube channels have at least 73 million subscribers.

The Wall Street Journal became entangled in all this after February when it reported on PewDiePie’s use of anti-Semitic imagery and language. The famed YouTube personality then blasted the WSJ for taking his words out of context. 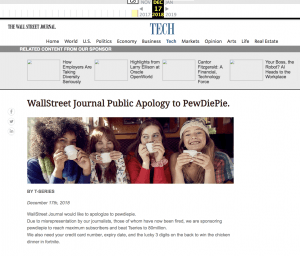 “WallStreet Journal would like to apologize to pewdiepie,” the hackers’ note reads. “Due to misrepresentation by our journalists, those of whome have now been fired, we are sponsoring pewdiepie to reach maximum subscribers and beat TSeries to 80million.”

The remainder of the post  alludes to a popular meme from viral Youtube personality VoiceOverPete: “We also need your credit card number, expiry date, and the lucky 3 digits on the back to win the chicken dinner in fortnite.”

A Wall Street Journal spokesperson told Threatpost that they are aware of the issue and that the webpage has since been removed (the archive is still available).

“The page was owned by WSJ Custom Studios, a unit of the advertising arm, which is not affiliated with The Wall Street Journal newsroom,” The spokesperson told Threatpost. “We have launched a full investigation.”

The incident comes as hackers over the weekend hijacked what they said were hundreds of thousands of printers to print messages in support of PewDiePie. The hackers, go under the Twitter handles @HackerGiraffe and @j3ws3r, dubbed the attack on Twitterverse as #PrinterHack2.

However, in regards to this latest hack, @HackerGiraffe said via Twitter, “I don’t support defacement. Now @j3ws3r and I will be painted all across media as evil hackers that promoted kids to illegally hijack a media company’s website to promote @pewdiepie.”

The WSJ did not respond to further questions from Threatpost about how the webpage was hacked or the timeline.

This post was updated on Dec. 18 at 2pm ET to reflect that part of the hackers’ post alluded to a popular meme.

The Lawful Access to Encrypted Data Act is being decried as “an awful idea” by security experts.