Amazingco, which is based in Austrailia but offers services in New Zealand and the U.S., connects customers with event planning organizers for experiences such as company picnics, kid’s entertainment and wine tours. The company’s platform is used by more than one million organizers and attendees, according to its website.

“These records contained names, email, phone numbers, addresses, and notes about the events,” said Jeremiah Fowler, senior security research at Security Discovery in a post. “A large portion of these were for children’s entertainment and wine tours. These also included customer feedback in detail and internal notes on specific events.”

Amazingco did not respond to a request for comment from Threatpost.

Fowler said that he discovered the publicly accessible Elastic database – visible in any browser and accessible without administrative credentials – on May 11. Fowler sent notification messages to Amazingco and did not hear back. He has since confirmed that the database is now closed and no longer publicly accessible.

Of the 212,220 total records, up to 174,000 were part of a folder titled “Customers” with user names, emails, phone numbers, internal notes and other sensitive details about clients. In addition, Fowler said that he discovered IP addresses and storage information that could be exploited by cybercriminals to further access the network. 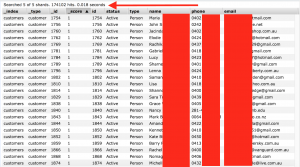 A screenshot of the leaked database

“The down side to this is that each of these were connected to the client’s real personally identifiable data and the files also included internal notes on the clients, their events and any challenges Amazingco’s staff experienced,” said Fowler.

Researchers said it is unclear how long the customers’ data was exposed online or if anyone had accessed it, however Fowler speculated that the data may have been available for at least a week before the notification was sent.

Recently in May misconfigured cloud databases inadvertently leaked personally identifiable information (PII) in the care of two companies: The Ladders headhunting and job recruitment site, and the SkyMed medical evacuation service. And in April an ElasticSearch database that was left open to the internet exposed about 4.9 million data points of personally identifiable information (PII) related to individuals seeking treatment at an addiction treatment facility, Steps to Recovery.

“This is yet another wake up call for any company large or small who collects customer data and stores it online,” Fowler said. “It does not matter the customers are software users from around the world or small children at a birthday party in Australia, the same data protection and privacy safeguards should be taken.”