During its regularly scheduled April security update, Adobe overall issued 43 patches, including ones for 24 critical vulnerabilities in eight of its products.

Overall, Adobe issued fixes for 43 different CVE numbers across eight different products, Tuesday, as part of a regularly-scheduled monthly security update. The company said that none of the vulnerabilities are currently being exploited in the wild. Acrobat Reader, Adobe’s family of products allowing users to create and manage PDF files, had the bulk of security flaws that were patched, with 21 vulnerabilities overall, 11 of which were critical arbitrary code execution flaws.

“Adobe has released security updates for Adobe Acrobat and Reader for Windows and macOS. These updates address critical and important vulnerabilities,” said Adobe in its update.  “Successful exploitation could lead to arbitrary code execution in the context of the current user.” 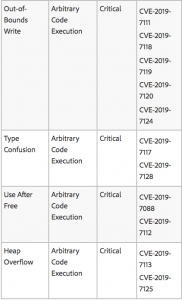 “The patch for Acrobat corrects 21 different CVEs,” said Dustin Childs, with Trend Micro’s Zero-Day Initiative, in a Patch Tuesday analysis. “The worst of these vulnerabilities could allow an attacker to completely take control of an affected system.”

Adobe also fixed seven arbitrary code execution flaws in the Windows version of its Shockwave Player, which is its multimedia platform for building interactive multimedia applications and video games. Impacted are versions 12.3.4.204 and earlier: Users are urged to update to version 12.3.5.205.

“The update for Bridge CC corrects eight CVEs – all of which were reported through the ZDI program,” said Childs. “Included are two Critical-rated remote code execution bugs that could allow an attacker run their code in the context of the logged-on user.”

Also patched was an “important” flaw in Adobe Experience Manager Forms and a “moderate” severity vulnerability in Adobe Dreamweaver.

The regularly-scheduled updates come on the heels of a somewhat sparse March update for Adobe, when the company patched only two critical flaws in Photoshop CC and Adobe Digital Editions. Earlier in March, Adobe also issued an emergency patch for a critical vulnerability in its ColdFusion service that was being exploited in the wild. The vulnerability, CVE-2019-7816, exists in Adobe’s commercial rapid web application development platform, ColdFusion.

Microsoft Wraps Up a Lighter Patch Tuesday for the Holidays