The patches are part of Adobe’s regularly-scheduled fixes.

Adobe Systems is stomping out 17 critical vulnerabilities in Acrobat Reader, Photoshop and Brackets, which could lead to arbitrary code execution if exploited.

The update is a Priority 2, which according to Adobe “resolves vulnerabilities in a product that has historically been at elevated risk. There are currently no known exploits. Based on previous experience, we do not anticipate exploits are imminent. As a best practice, Adobe recommends administrators install the update soon (for example, within 30 days).” 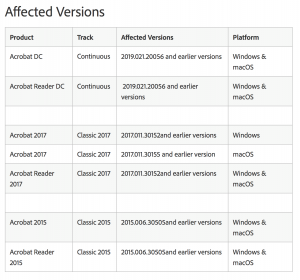 Honggang Ren of Fortinet’s FortiGuard Labs was credited with discovering the flaws.

A final critical vulnerability was disclosed in versions 1.14 and earlier of Brackets for Windows, Linux and MacOS (users are encouraged to update to version 1.14.1).

The flaw (CVE-2019-8255) is a command infection vulnerability that could enable arbitrary code execution. Tavis Ormandy of Google Project Zero was credited with discovering the flaw.

Adobe also reported an important flaw (CVE-2019-8256) in ColdFusion Update 6 and earlier versions, stemming from insecure inherited permissions of the default installation directory, that could enable privilege escalation. A fix is available in Update 7.

Overall, Adobe issued more critical patches in December than it did in November, when it warned Illustrator 2019 users that two critical memory-corruption vulnerabilities could allow for an attacker to remotely connect to a Windows machine, execute code and gain control of the targeted system.