Chief among the update is that the malware now targets Microsoft’s anti-malware software interface (ASMI) in order to avoid detection. ASMI allows applications and services to integrate with any antimalware product that’s present on a machine. The malware also now has the added capability of deploying a Tor client to conceal its communications, as well as using the Telegram chat application to exfiltrate data.

All of these changes make both sandbox and static analysis and endpoint detection of the malware more difficult, warned researchers.

“Agent Tesla remains a consistent threat—for many months, it has remained among the top families of malware in malicious attachments caught by Sophos,” said Sophos researchers on Tuesday. “Because of this sustained stream of Agent Tesla attacks, we believe that the malware will continue to be updated and modified by its developers to evade endpoint and email protection tools.”

Agent Tesla first came into the scene in 2014, specializing in keylogging (designed to record keystrokes made by a user in order to exfiltrate data like credentials and more) and data-stealing. Agent Tesla has historically arrived in a malicious spam email as an attachment.

The first stage of the malware’s newer version includes a .NET-based downloader. The downloader collects obfuscated code from websites like Pastebin and Hastebin (which touts itself as an “open source alternative to Pastebin”).  This is not a new tactic, with Agent Tesla previously turning to a legitimate Pastebin-like web service for downloading malware. 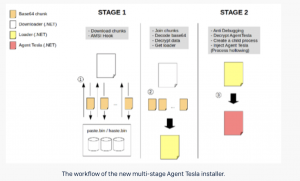 Then, Agent Tesla’s installer attempts to overwrite code in Microsoft’s AMSI. First, the downloader attempts to get the memory address of AmsiScanBuffer (Microsoft’s function, also known as amsi.h, that scans a buffer-full of content for malware).

It does so by calling Windows’ amsi.dll, using the Windows LoadLibraryA function, to get the DLL’s base address. Then it uses the GetProcAddress function to retrieve the base address and the “AmsiScanBuffer” procedure name to get the address of the function.

Once Agent Tesla gets the address of AmsiScanBuffer, it patches the first 8 bytes of the function in memory. This forces AMSI to return an error (code 0x80070057), making all the AMSI scans of memory appear to be invalid, according to researchers.

“This kneecaps AMSI-enabled endpoint protection software, by essentially making them skip further AMSI scans for dynamically loaded assemblies within the Agent Tesla process,” said researchers. “Since this happens early in the first stage downloader’s execution, it renders any AMSI protection against the subsequent components of the downloader, the second-stage loader, and the Agent Tesla payload itself.”

The new version of Agent Tesla also has the added capabilities of deploying a Tor client. This free, open-source software enables anonymous communication – serving as a tool for Agent Tesla to conceal its communications, said researchers.

Researchers said the functionality of these two new variants is widely the same, but now include updates to the data that is captured, and how it is exfiltrated.

In the new Agent Telsa version, the developers can now capture data from the Windows clipboard. The Windows clipboard is a storage area for items the have been cut or copied; this data could include anything from sensitive copied data from emails or documents, to passwords. This data is then sent back to the command-and-control (C2) server.

Another difference is that in the new version of Agent Tesla, the number of applications targeted for credential harvesting “has been expanded considerably.”

“The credential-stealing function also includes code which launches a separate thread to exfiltrate browser cookies. While this code is present in all the samples of Agent Tesla from both v2 and v3, it isn’t always used,” said researchers.  “Also, this feature is not set from the configuration file—so, perhaps, it’s a premium feature attackers must buy from Agent Tesla’s developer.”

While the Windows-targeting Agent Tesla remote access trojan (RAT) has been active for over seven years, researchers said that they have continued to see new variants of the malware in a growing number of attacks over the past 10 month, compared to the infamous TrickBot or Emotet malware, for instance.

“The differences between the two demonstrate how the RAT has evolved, employing multiple types of defense evasion and obfuscation to avoid detection,” they said.