Survey reveals that skepticism towards privacy issues remain at an all-time high. 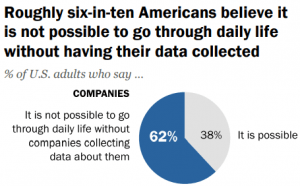 Call it a case of Facebook privacy breach fatigue. When asked, Americans say companies do a worse job than the government when it comes to protecting data collected on their behalf. They also complain potential risks they face because of data collection by companies outweigh the benefits.

The study, released Friday by the Pew Research Center called Americans and Privacy: Concerned, Confused and Feeling Lack of Control Over Their Personal Information, sheds a bright privacy light into how Americans feel about their privacy in a post—Facebook and Cambridge Analytica world. It also reveals that skepticism towards privacy issues remain at an all-time high.

“Large data breaches have become a regular feature of modern life – affecting companies like Capital One, Facebook, Equifax and Uber,” wrote a team of Pew authors credited for writing the 63-page report (PDF). “This survey finds that seven-in-ten Americans feel their personal information is less secure than it was five years ago, only 6 percent say their information is more secure, and about a quarter (24 percent) feel the situation has not changed.”

Most Americans (63 percent) said they believed their online and offline activities are now regularly being tracked and monitored by companies and the government. The attitude is magnifying distrust of “data-driven products and services” that promise money savings and health benefits such as activity trackers. Eighty-one percent of survey respondents said the data risks associated with sharing data with companies aren’t worth the rewards. 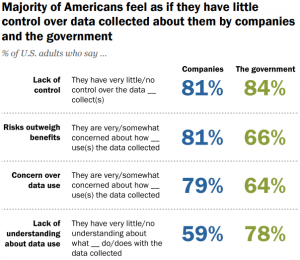 Surprisingly, by a wide margin, a majority of Americans reported concerns over the way their data is being used by companies (79 percent) versus the government (64 percent).

That’s not to say that Americans don’t believe the government is collecting copious amounts of data about them.

“Seventy-two percent of Americans report feeling that all, almost all or most of what they do online or while using their cellphone is being tracked by advertisers, technology firms or other companies… Close to half (47 percent) of adults believe at least most of their online activities are being tracked by the government,” according to Pew.

Also interesting is privacy attitudes when it comes to companies being accountable for data they collect and warehouse. Seventy-nine percent of survey respondents told Pew that they are “not too confident” or “not confident at all” when it came to companies publicly admitting to mistakes and taking responsibility if they misused or compromised users’ personal data. Twenty-one percent said they are very (3 percent) or somewhat (18 percent) confident.

One remedy to data and privacy insecurity is regulation. Seventy-five percent of adults say there should be more regulation than there is now, according to the survey.

“Although a majority of both Republicans and Democrats agree that companies use of personal data should be regulated more than they are now, Democrats (including independents who lean towards the Democratic party) are more likely than Republicans and Republican leaners to believe there should be more government regulation of what companies can do with their customers’ personal information (81 percent vs. 70 percent),” according to the report.