Amidst growing popular protests, Egypt has been severed from the Internet, according to reports from Intenet monitors and reporters within the country.

Amidst growing popular protests, Egypt has been severed from the Internet, according to reports from Intenet monitors and reporters within the country.

The Associated Press and Reuters both confirmed reports of widespread outtages within Egypt affecting customers of all of the country’s main ISPs. The unexplained, country-wide outage follows days of violent street protests against the government of Hosni Mubarak.

It is still unclear whether the outage was government sanctioned and, if so, who ordered it. But it does appear to have been coordinated, rather than inadvertant or rolling. Internet monitoring firm Renesys said that it observed “virtually simultaneous withdrawal of all routes to Egyptian networks in the Internet’s global routing table” at around 22:43 UTC. The takedown involved  ore than 3,500 BGP (Border Gateway Protocol) routes were withdrawn, Renesys said, depriving “virtually all of Egypt’s Internet addresses” from access to the global Internet. However, traffic running across Egypt and serving countries in the Middle East appears to be unaffected. Also, one ISP, Noor Group, continued to have access to the Internet as of 3:06 UTC, Renesys reported. Noor Group’s customers include the Egyptian Stock Exchange. 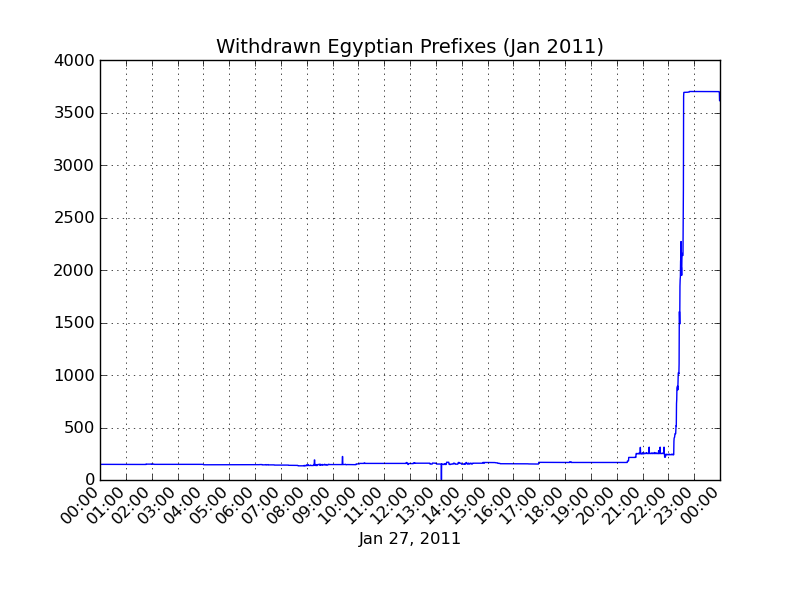 Governments commonly filter or limit Internet access during periods of political unrest. The Tunisian government engaged in some blocking and censoring of social network sites like Facebook during popular protests there that succeeded in toppling a two decade old dicatatorship in January 15. Facebook has since said that its security team intervened to prevent the government from deleting or cutting off group and user pages used by protesters. The Iranian government also limited communications into and out of the country during widespread popular protests following a contested election.

However, Renesys said that there are few examples of a country the size of Egypt cutting off Internet access altogether. The impact of the crackdown on Egypt’s economy is unclear, though large disruptions can be expected for communications, commerce and travel tomorrow, should Internet access remain blocked.

Other Internet monitoring services have collected reports of outages from within the country as well. A post on the Herdict blog at Harvard’s Berkman Center for Internet and Society indicates that neither Twitter or Facebook are accessible within the country. The Web page of arabist.net, a prominent Egyptian blog that had issued updates on the protests within the country was unreachable late Thursday.

While Egypt’s action is unprecedented, lawmakers in the U.S. will reintroduce a bill first introduced in 2010 by Independent Senator Joseph Lieberman of Connecticut and Susan Collins of Maine that would give the President of the United States access to an Internet “kill switch” that would sever the nation’s access to the Internet in the event of a cyber emergency. Its unclear whether Egypt’s action – widely seen as an effort by security forces to tamp out protests – will effect debate on that bill.

The latest #TikTok attacks are served to #gamers on the platform disguised as “free” or “hacked” versions of games… https://t.co/nepYBy5SD6