Researchers found the threat group, dubbed Rampant Kitten, has targeted Iranian entities with surveillance campaigns for at least six years. It specifically targets Iranian minorities and anti-regime organizations, including the Association of Families of Camp Ashraf and Liberty Residents (AFALR); and the Azerbaijan National Resistance Organization.

The threat group has relied on a wide array of tools for carrying out their attacks, including four Windows info-stealer variants used for pilfering Telegram and KeePass account information; phishing pages that impersonate Telegram to steal passwords; and the aforementioned Android backdoor that extracts 2FA codes from SMS messages and records the phone’s voice surroundings.

“Following the tracks of this attack revealed a large-scale operation that has largely managed to remain under the radar for at least six years,” said researchers with Check Point Research, in a Friday analysis. “According to the evidence we gathered, the threat actors, who appear to be operating from Iran, take advantage of multiple attack vectors to spy on their victims, attacking victims’ personal computers and mobile devices.”

Researchers first discovered Rampant Kitten’s campaign through a document, the title of which translates to “The Regime Fears the Spread of the Revolutionary Cannons.docx.” It’s unclear how this document is spread (via spear phishing or otherwise), but it purports to describe the ongoing struggle between the Iranian regime and the Revolutionary Cannons, an anti-regime, Mujahedin-e Khalq movement.

The document when opened loads a document template from a remote server (afalr-sharepoint[.]com), which impersonates a website for a non-profit that aids Iranian dissidents. 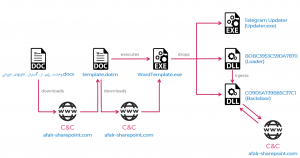 It then downloads malicious macro code, which executes a batch script to download and execute a next-stage payload. This payload then checks if the popular Telegram messenger service is installed on the victims’ system. If so, it extracts three executables from its resources.

These executables include an information stealer, which lifts Telegram files from victim’s computer, steals information from the KeePass password-management application, uploads any file it can find which ends with a set of pre-defined extensions, and logs clipboard data and takes desktop screenshots.

Researchers were able to track multiple variants of this payload dating back to 2014. These include the TelB (used in June and July 2020) and TelAndExt variants (May 2019 to February 2020), which focus on Telegram; a Python infostealer (February 2018 to January 2020) that is focused on stealing data from Telegram, Chrome, Firefox and Edge; and a HookInjEx variant (December 2014 to May 2020), an infostealer that targets browsers, device audio, keylogging and clipboard data.

During their investigation, researchers also uncovered a malicious Android application tied to the same threat actors. The application was purporting to be a service to help Persian speakers in Sweden get their driver’s license.

Instead, once victims download the application, the backdoor steals their SMS messages and bypasses 2FA by forwarding all SMS messages containing 2FA codes to an attacker-controlled phone number.

“One of the unique functionalities in this malicious application is forwarding any SMS starting with the prefix G- (The prefix of Google two-factor authentication codes) to a phone number that it receives from the C2 server,” said researchers. “Furthermore, all incoming SMS messages from Telegram, and other social network apps, are also automatically sent to the attackers’ phone number.”

Of note, the application also launches a phishing attack targeting victims’ Google account (Gmail) credentials. The user is presented with a legitimate Google login page, inside Android’s WebView. In reality, attackers have used Android’s JavascriptInterface to steal typed-in credentials, as well as a timer which periodically retrieves the information from the username and password input fields. 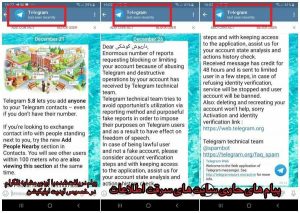 “We have located two different variants of the same application, one which appears to be compiled for testing purposes, and the other is the release version, to be deployed on a target’s device,” said researchers.

Researchers also warned of websites owned by the threat actors that were phishing pages impersonating Telegram. A Telegram bot was sending phishing messages warning recipients that they were making improper use of Telegram’s services, and that their account will be blocked if they do not enter the phishing link.

“Since most of the targets we identified are Iranians, it appears that similarly to other attacks attributed to the Islamic Republic, this might be yet another case in which Iranian threat actors are collecting intelligence on potential opponents to the regime,” said researchers.