After facing criticism for removing or restricting several parental control apps over the past year, Apple cited security and privacy reasons.

Apple is defending its decision to take down several highly popular parental control apps amidst a firestorm of backlash, saying it did so for “privacy and security” reasons.

Apple came under scrutiny this weekend after a New York Times article alleged that the phone giant had unfairly removed or restricted at least 11 top screen-time and parental-control apps from its marketplace – after creating its own screen-time app. Among those that have been removed are OurPact, which has 3 million downloads, and Mobicip, which has 2.5 million downloads.

While it looks like a competitive move, Apple tells a different story: Its aim was to weed out apps that were using mobile device management (MDM) technology it said, which gives third-party control and access over other devices and sensitive information, including location, app use and more. Parental-control apps, which allow parents to keep tabs (and set limits) on their children’s on-phone activities, locations and more, are thus effectively collecting way too much data, Apple said.

“We recently removed several parental-control apps from the App Store, and we did it for a simple reason: They put users’ privacy and security at risk. It’s important to understand why and how this happened,” the company said in a Sunday statement, entitled “The Facts About Parental Control Apps.”

Regardless of the reason, the incident has raised questions about how competition is handled between apps and the sometimes-competing platforms that they are sold on. Impacted app developers, for their part, continue to be up-in-arms regarding the incident – with two popular parental control apps, Kidslox and Qustodio, last week filing an anti-competition complaint with the European Commission’s competition office.

The Saturday report by the New York Times, working with app data firm Sensor Tower, shows that Apple has removed or restricted 11 of the 17 most downloaded parental-control apps, as well as restricting lesser-known apps. That includes forcing apps to remove features that enable parents to control children’s devices, or restrict access to adult content.

The move comes after Apple launched its own screen control app, Screen Time, a feature built into iOS 12 that enables users to set screen time and limits on their own phones.

The complaint from Kidslox and Qustodio that was filed with the European Commission’s competition office was filed in tandem with the report, saying that the removal and restriction of parental-control apps was an anti-competitive practice by nature.

Kidslox alleges that Apple has required it to make changes to its app that ultimately harmed it competitive factor.

“To create Screen Time, Apple took the best pieces and best practices from existing parental-control and well-being apps in the App Store, bringing no tangible innovations to market,” Kidslox CEO Viktor Yevpak said in a statement provided to Threatpost. “Standing up to Apple is about even more than fair competition.”

Meanwhile Qustodio, in a statement showed to Threatpost regarding the EU complaint, said that Apple has arbitrarily blocked several parental-control apps in the market from making app updates, while completely removing others.

“With the introduction of Apple’s Screen Time, developers in the parental control category experienced unprecedented anti-competitive behavior from Apple,” Qustodio CEO Eduardo Cruz said in the statement. “The company acts as both a marketplace and a gatekeeper and uses its dominant position to create exclusive competitive advantage for its own service.”

Other screen-time apps began complaining about being removed from the Apple Store all the way back in the fall of 2018, including Mute, a screen-time tracking app.

Nick Kuh, creator of Mute, complained in October 2018 that Apple had removed his app from the App Store (Apple later returned his app after his post gained media attention).

In response to reports of developer outrage, Apple said in a statement: “Apple has always supported third-party apps on the App Store that help parents manage their kids’ devices. Contrary to what the New York Times reported over the weekend, this isn’t a matter of competition. It’s a matter of security.”

Apple said several of the apps removed use the MDM format, which is typically used by enterprises to give companies control over their employees’ devices. However, when non-enterprise developers use the feature on their apps, the technology can have dangerous privacy and security implications, Apple said.

These MDM functions give apps a “configuration profile” which is generally used for enterprises – and allow users to configure or track certain settings – including app settings, Wi-Fi and permissions. In other words, app developers behind the apps gain access to all data – such as location, activity and more –  of the children whose phones are being controlled. 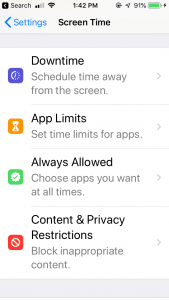 Apple did not respond to multiple requests for comment from Threatpost.

The company in its statement said that it began noticing that non-enterprise developers were using MDM back in early 2017, and updated their guidelines based on that work in mid-2017.

“When we found out about these guideline violations, we communicated these violations to the app developers, giving them 30 days to submit an updated app to avoid availability interruption in the App Store,” Apple said. “Several developers released updates to bring their apps in line with these policies. Those that didn’t were removed from the App Store.”

However, app developers argue that MDM is not used maliciously and that parents setting up the apps are given fair notice about the MDM features when downloading the app.

Suren Ramasubbu, CEO of one of the parental control apps impacted by Apple’s crackdown, Mobicip, said that when parental control apps using MDM is installed, it is the parent that goes through the process of setting up – and they are explicitly asked to agree to the terms and conditions and privacy policy before installing the MDM profile and certificate.

“Please note that the parent has explicitly agreed to enroll the device in a third-party MDM system,” he said in a post over the weekend. “Do these parents understand the risks? May be. May be not. But should it be the parent who decides the risk vs. reward? Given that Apple Screen Time requires both parents and children to be on Apple devices, and given that most families today have a blend of devices with the parents on Android, isn’t it anti-competitive to not give parents this choice?”

Apps like Kidslox and Qustodio continue to maintain that Apple’s practices are unfair – and ultimately hurting both app developers and consumers.

“Qustodio and Kidslox are asking Apple to stop this unprecedented hostile behavior, compete fairly, and open up exclusive API’s and technologies introduced in their own Screen Time service,” according to Qustodio.

It’s not the first time Apple has come under fire for anti-competition app store practices – in March, Spotify filed a complaint against the iPhone maker saying that newly-introduced App Store rules – such as a 30 percent tax imposed on purchases made via Apple’s payment system – stifle competing music services that are being sold on its platform.