Apple claims it will fix a previous disclosed flaw in its mobile operating system that can allow hackers complete access to an iPhone or iPad via a fake USB charger.

Apple claims it will fix a previously disclosed flaw in the current iteration of its mobile operating system, iOS 6, that can allow hackers complete access to an iPhone or iPad via a fake USB charger.

Numayr acknowledged the flaw and confirmed it would be addressed in iOS 7, adding that it’s already been fixed in the beta version of the operating system that’s currently being used by developers.

“We would like to thank the researchers for their valuable input,” Numayr told Reuters.

iOS 7 is scheduled to be released to the general public at some point this fall while iOS 7 5 Beta is slated to hit Aug. 12.

A research scientist at the Georgia Institute of Technology, Billy Lau, alongside graduate students Yeonjin Jang and Chengyu Song, divulged the flaw in June. 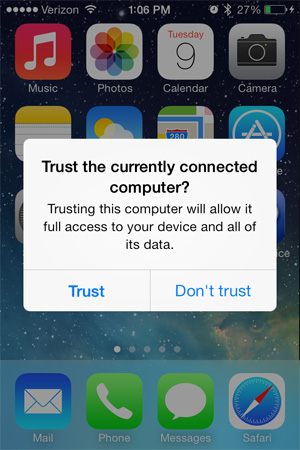 The hack uses a small Linux computer and a modified charger the trio nicknamed a “Mactan,” – a reference to Latrodectus Mactan, the scientific name for the Southern black widow spider. Once a device is plugged into the Mactan, the trio programmed the infected phone to dial the number of one of the researchers.

That was relatively harmless compared to what else could have been done. Lau has mentioned that once given full access, attackers could easily mount data stealing Trojans and other spy tools onto an infected device.

Once iOS 7 is released, iPhone and iPad users will be able to select whether they trust the computer their device has been plugged into and in turn give it full access to the device’s data.