Researchers disclosed critical flaws in the popular Meetup service at Black Hat USA 2020 this week, which could allow takeover of Meetup “Groups.”

A popular online social service, Meetup, has fixed several critical flaws in its website. If exploited, the flaws could have enabled attackers to hijack any Meetup “group,” access the group’s member details and even redirect Meetup payments to an attacker-owned PayPal account.

Meetup is a service with a user base of over 35 million users, used to organize online groups with events for people with similar interests. These events are either for free, or participants can register for a fee using PayPal. While events are typically in person, in light of the ongoing pandemic, many events have moved to virtual settings.

Researchers disclosed the issues to Meetup, which has since fixed all the vulnerabilities as of July 15. The flaws were not publicly disclosed by researchers until Monday.

“Meetup takes reports about its data security very seriously, and appreciates Checkmarx’s work in bringing these issues to our attention for investigation and follow up,” according to a Meetup statement.

The first flaw researchers discovered was stored a cross-site scripting vulnerability on Meetup’s discussion feature, which is activated by default in a Meetup group. The flaw has a CVSS score of 8.7 out of 10, making it high severity. The issue is that Meetup does not properly sanitize the discussion field.

To exploit the flaw, an attacker simply needs to post a custom script to the Meetup discussion forum. This causes a JavaScript popup to occur as soon as any user visits the Meetup page. When the user clicks the popup, an attacker can then carry out various malicious functions, such as stealing their web browsing data (sessions and cookies).

“Now, instead of have a message or a discussion or a post on the page, we could have put some benign message actually in the background on a script,” Erez Yalon, the director of security research with Checkmarx, told Threatpost. “So this by itself is very bad already, because it means that in the context of a web browser, we can do whatever we want. Now for every person who visits this discussion board, so it can be stealing information that is part of your web browsing process like cookies and sessions, and things like that. We can deface the website or even do some cryptomining on the web browser.” 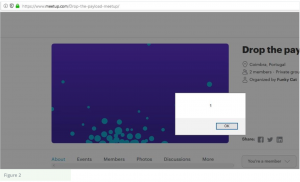 The attack was made more severe after researchers also found a CSRF glitch on the Payments Received  API endpoint of Meetup.  CSRF means that when an attacker is authenticated on the server they also have control over the client.

Researchers were able to chain together the XSS flaw and CSRF glitch, which is the “holy grail” for attackers: “When you manage to, to chain these two together, and sometimes there are no limits to what can actually happen,” said Yalon.

That means that if a user with high privileges (like a meetup group “co-organizer”) clicks on the malicious script, attackers could then escalate their privileges to “co-organizer”, hijack a Meetup group page, and completely manage the group. Since the form to change the PayPal recipient’s email address in Settings / Payments received is vulnerable to CSRF, attackers would be also able to change the PayPal email address of every Meetup user to their own PayPal email address, without the victims noticing.

Researchers also found several other less serious issues in Meetup, including that the website had a lack of resources and rate-limiting and an Excessive Data Exposure issue.

The research was unveiled this week at Black Hat USA 2020, which kicked off on Saturday and will focus largely on new security threats, election security, COVID-19 and remote work, and other themes.