Authorities in Ukraine have made another cybersecurity bust — this time shutting down what they said is one of the largest underground cryptomining operations ever found. The ring was apparently run by stringing together 3,800 Sony PlayStation 4 (PS4) gaming consoles.

Cryptominers serve as auditors for endless strings of blockchain ledgers, which is some cases is rewarded with cryptocurrency, which itself isn’t illegal. But stealing the vast amounts of electricity needed to power the computer farms required to mine cryptocurrency is most definitely prohibited.

This group of PS4-powered cryptominers, according to the Security Service of Ukraine, was allegedly stealing anywhere from $186,200 to $259,300 worth of electricity every month. That’s something the building owner meanwhile disputed.

The cryptomining operation was set up in a warehouse in the city of Vinnytsia, formerly owned by a company called JSC Vinnytsiaoblenerho, which denies any involvement and refutes any electricity was stolen from the location, according to a translated statement from the company. 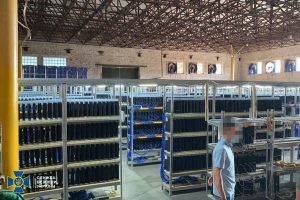 “During the inspection, the representatives of the controlling body did not reveal any facts of theft of electricity,” the company said. “Therefore, the information about the multimillion-dollar theft of electricity is not true. The management of JSC Vinnytsiaoblenergo actively cooperates with the investigation and is interested in establishing all the facts and punishing the perpetrators.”

The Security Service of Ukraine alleges the cryptomining group’s electricity consumption likely led to power surges and outages in the area.

The cryptominers will be charged with “…the theft of water, electricity or thermal energy through its unauthorized use,” according to the SSU.

Cryptomining continues to be a popular criminal activity, with new approaches (such as turning to the cloud) cropping up all the time. On Wednesday for instance, a Romanian gang emerged with a Linux-focused campaign.

Meanwhile, Ukrainian law enforcement has made a number of high-profile cybersecurity arrests in recent months, most notably the raid of the Clop ransomware group’s operation. Ukrainian police were also involved in the international takedown of Emotet and assisted Europol’s efforts to dismantle the DarkMarket illegal online marketplace.