Palo Alto Networks’ Unit 42, which published the report Thursday, said that the malware samples it found do not compromise, end-run or attack the security and monitoring products in question; they rather simply uninstall them from compromised Linux servers.

Specifically, the malware samples set about uninstalling products developed by Tencent Cloud and Alibaba Cloud (Aliyun), two leading cloud providers in China that are expanding their business globally, researchers said. These security suites include key features such as trojan detection and removal based on machine learning, logging activity audits and vulnerability management.

“Palo Alto Networks Unit 42 has been cooperated with Tencent Cloud and Alibaba Cloud to address the malware evasion problem and its C2 infrastructure,” Ryan Olson, vice president of threat intelligence for Unit 42, told Threatpost. “To the best of our knowledge, this is the first malware family that developed the unique capability to target and remove cloud security products.”

The new malware is being actively used by the Rocke threat group. Rocke was first reported by Cisco Talos in July 2018, and pegged as an increasingly formidable Chinese-language threat actor leveraging a wide array of Git repositories to infect vulnerable systems with Monero-based cryptomining malware.

Once the malware is downloaded, it establishes a command and control server connection and downloads a shell script called “a7” on the system. 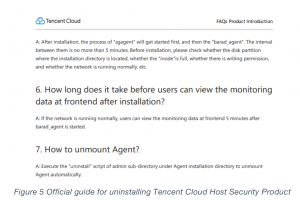 That shell script begins to execute an array of malicious activities, including killing other cryptomining processes on the system, downloading and running a coin-miner, and hiding its malicious actions from Linux through using the open source tool “libprocesshider.”

It is at this stage where the latest malware samples flaunt a function that deploys the never-before-seen trick: they can uninstall cloud workload protection platforms, the agent-based security protection solutions for public cloud infrastructure.

Neither Tencent Cloud nor Alibaba Cloud responded to Threatpost’s request for comment.

As for the malware itself, Unit 42 researchers also suspected that the family appears to be developed by the Iron cybercrime group (the payload for Iron and Rocke’s malware are similar, and the malware reaches out to similar infrastructure, Talos researchers said in their report).

The malware is also associated with the Xbash malware, a sophisticated family in the wild disclosed by Unit 42 researchers in September, which wrecks havoc on Windows and Linux systems with a combination of data destructive ransomware and malicious cryptomining.

However, this sample’s ability to uninstall security tactics on systems brings it a step further when it comes to targeting public cloud infrastructure.