The campaign spread seemingly innocuous emails around the company, with the goal of stealing Microsoft login credentials, researchers at Armorblox revealed.

Around 550 members of the targeted company received the same email in their inboxes, researchers told Threatpost. The sender’s name was “Hannah Mcdonald,” and the subject line and the body of the email were quite simple and to the point, as seen below: 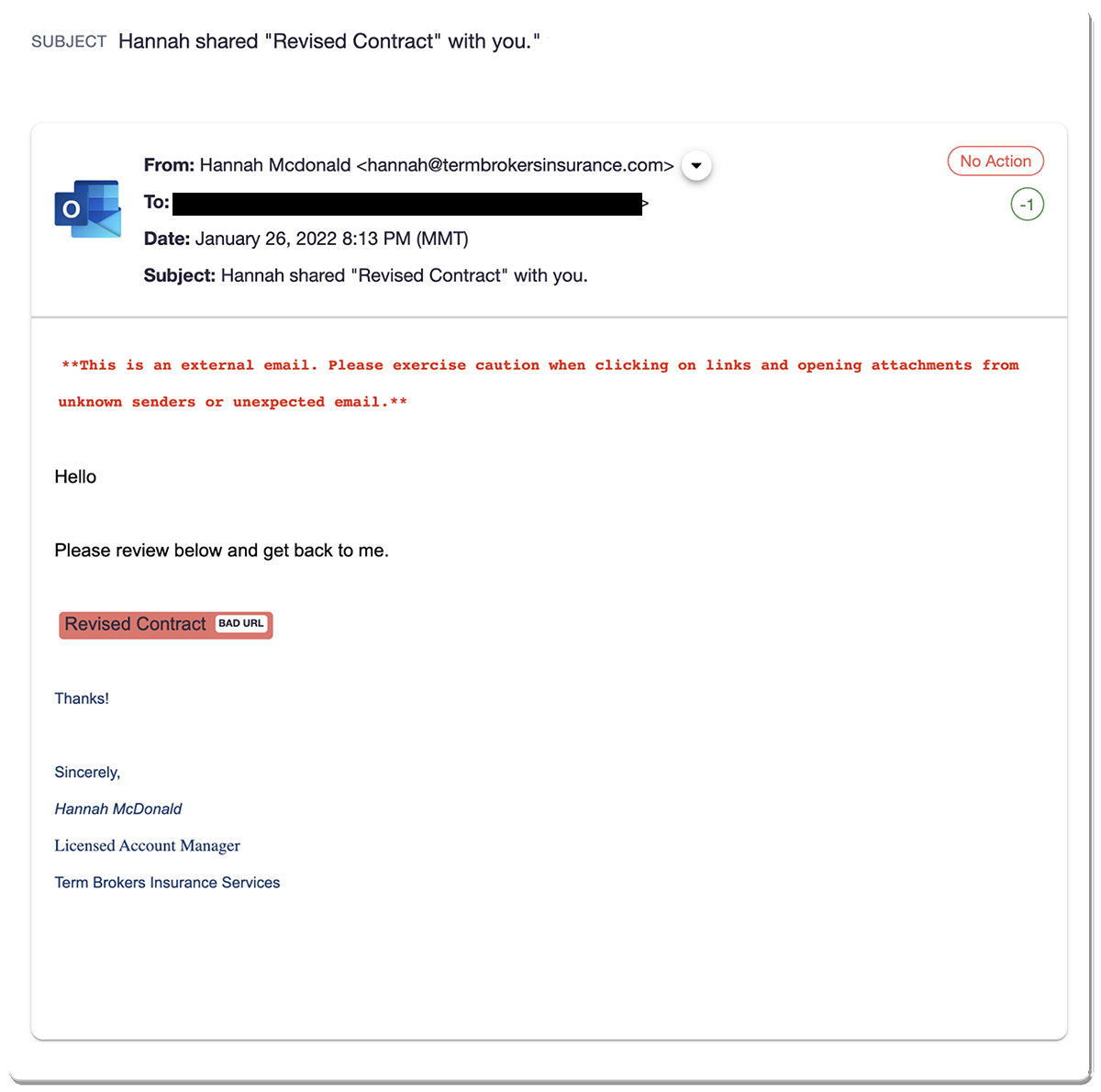 Those who clicked the link in the email were presented with a preview of an electronic document through DocuSign, a common e-signature software, according to Armorblox’ Thursday analysis. The preview looked like a legitimate DocuSign landing page, with a prompt to “Please review and sign this document,” and an indication that other parties had already added their signatures.

The preview was hosted on Axure, researchers noted – a valid, cloud-based prototyping portal.

Funnily enough, just like the real thing, the copycat page contained a cybersecurity warning – advising the target to not share access with others – in fine print.

Those who clicked to view the document were presented with a Microsoft single sign-in login page. Any login credentials entered at this stage would’ve ended up with the attackers.

The phishing emails successfully evaded traditional email security measures in part because they came from a domain belonging to TermBrokersInsurance. The report noted that “a quick scan of the domain address would not have alerted the end user of fraudulent activity because of the domain’s validity. In the payment industry this domain would have passed most of the custom defined policies, further increasing end users’ chance of falling victim to this sophisticated phishing attack.”

Microsoft’s Spam Confidence Level (SCL) – a measure of the perceived legitimacy of any given email – assigned these malicious emails a score of ‘-1.’ In SCL, -1 is the lowest possible score, allowing a message to skip filtering because it “is from a safe sender, was sent to a safe recipient or is from an email source server on the IP Allow List.”

Impersonating and leveraging trusted cloud services is also an increasingly common tactic to evade email security filters. A benign link sent from a seemingly known and trusted application contains no inherent malicious content, after all.

In an email to Threatpost, Lauryn Cash, product marketing manager at Armorblox, highlighted integrated cloud email security – a cloud- and AI-based method of identifying anomalous emails – as a weapon to support existing email security tools: “Tools that leverage natural language understanding (NLU) can help stop zero-day attacks.” NLU is the ability of a computer to interpret meaning from human language.

The report concluded by recommending that potential targets remain vigilant about basic security hygiene – by not opening emails they’re not expecting, watching for targeted attacks, and using tools like password managers and multi-factor authentication.