Attacks emanating from Indonesia and China were plentiful over the last few months, with both countries being credited for three quarters of the world’s attacks in April, May and June.

Three-quarters of the world’s attack traffic emanates from source IP addresses in Indonesia and China, according to Akamai’s latest quarterly State of the Internet report. The report is a deep dive into traffic trends crossing the Cambridge, Ma.-based company’s network during the second quarter.

Attacks from Indonesia are on the rise, almost doubling from Q1 from 21 to 38 percent and dethroning China, whose attack traffic checked in at 33 percent, down slightly from 34 percent in Q1. The Pacific rim really reigned supreme when it came to attacks – along with South Korea and Taiwain, the region accounted for just over 79 percent of all observed attacks according to the firm’s studies.

The U.S. checked in at 6.9 percent, also a drop – but like China, a relatively negligible one.

On the whole, the company witnessed attacks coming from 175 different countries – some of those attacks, like those of the denial of service (DoS) variety, jumped, 318 in Q2, a 54 percent increase from Q1.

“There is a very real possibility this trend will continue, and perhaps even accelerate, as the current geopolitical environment heats up over events in Syria and elsewhere in the world,” the report said.

That makes a grand total of 526 DDoS attack reports Akamai has received so far this year, a number that at this point will likely surpass last year’s total of 768 reports. While a large chunk of those reports came from the Americas, Akamai notes reports from Asia tripled in the second quarter, a statistic that correlates with an uptick in attacks on smaller, business services companies in the region.

“The rise in attacks in the enterprise vertical were primarily driven by a series of attacks on business services customers in the Asia Pacific region,” reads one part of the report.

When broken down the enterprise sector saw the biggest jump in these attacks, increasing from 72 reported in Q1 to 134 in Q2 while commerce and media & entertainment came in second and third. 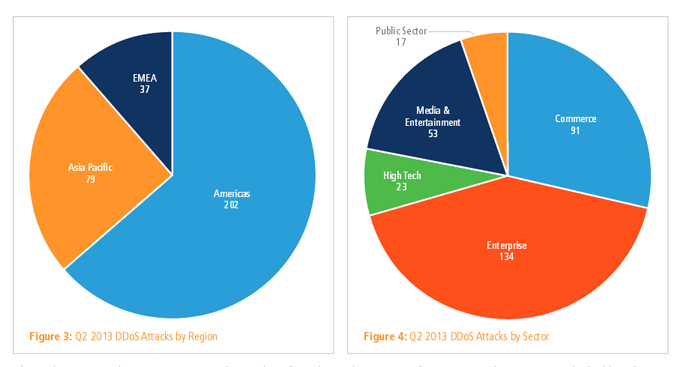 While the first section of the report deals with security and denial of service statistics, other portions discuss the Syrian Electronic Army’s (SEA) attacks on media outlets over the summer, the ongoing exhaustion of IPv4 addresses worldwide, and a rise in mobile data traffic.

The company drew its information from its Intelligent Platform, a cloud-based infrastructure that monitors attacks, connection speeds and other internet statistics globally throughout the year.

Experts Weigh in on E-Commerce Security Amid Snowballing Threats

How a retail sector reeling from COVID-19 can lock down their online systems to prevent fraud during the upcoming holiday shopping spike.

Zerologon Attacks Against Microsoft DCs Snowball in a Week

The attempted compromises, which could allow full control over Active Directory identity services, are flying thick and fast just a week after active exploits of CVE-2020-1472 were first flagged.