German divers for the environmental group World Wildlife Fund were searching the ocean floor for abandoned nets threatening marine wildlife. What they found instead is a treasured piece of computing history, a World War II-era German Enigma crypto machine, sunk to the bottom of the Baltic Sea to protect its precious technology from Allied forces.

The development of the Enigma Cipher machine and the life-and-death race to crack its code wasn’t just crucial to deciding the outcome of World War II; it ushered in the modern computing age. And because the Enigma’s secure code was a guarded German secret, as Allied forced approached, the military was ordered to destroy them, leaving just 320 of them surviving today, out of the more than 25,000 built for the German army from 1929 through the end of WWII, according to Dan Perera, director of the Enigma Museum.

Today these machines are highly sought after by governments, museums and private collectors, Perera told Threatpost. He added that Enigma machines have sold at auction priced between $190,000 and $270,000.

The WWF dive team was searching Gelding Bay in the Baltic Sea between Germany and Denmark for what they call “ghost nets,” a fishing device which gets hung up on something on the sea floor, harming marine life, Sophos Security explained. One ghost net they found was caught on something lead diver Florian Huber said his colleague described as an “old typewriter,.”

Huber said the Enigma was likely aboard one of 40 submarines sunk in the bay by the German Navy at the end of WWII. “We assume our Enigma went overboard in the course of events,” he told Sophos. 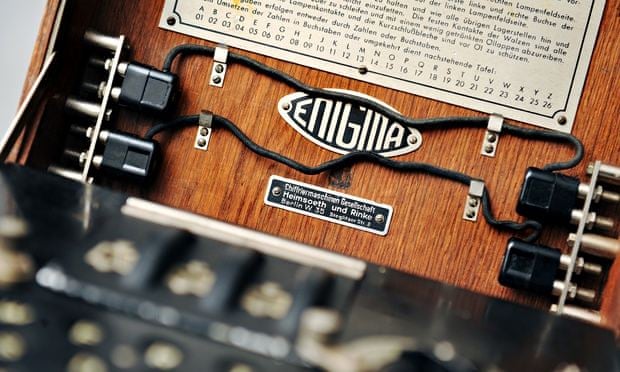 The Enigma was turned over the State Archaeological Office in Schleswig-Holstein where it will undergo a restoration process. Its first stop is back underwater for another year in distilled water to rinse the salt out of the device, Naked Security’s report added.

“Historians generally agree that the reading of secret messages sent by the German using Enigma machines shortened the war by at least two years, saved thousands of lives and deprived the Germans the time they needed to develop an atomic bomb,” Perera said.

The Allies, in their efforts to crack the Enigma’s secret code, also pushed technological boundaries.

“The Enigma machine helped birth the computer age,” Perera said. “The first functioning computers were developed as part of the Allied efforts to break the Enigma codes and the codes of other German cipher machines during WWII.”

Alan Turing, father of modern computing, invented a computer to crack the Enigma code in 1942 and inspired generations of cryptographers to pick up his work.

“This newly found Enigma is an exciting piece of military and intelligence history,” Rock Holland, security officer and vice president of strategy at Digital Shadows told Threatpost in reaction to the discovery. “The need to crack the Enigma code gave rise to cryptoanalysis, and ultimately modern-day Signals Intelligence. Alan Turing and his colleagues at the historic Bletchley Park helped turned the tide of World War II. The U.K.’s Government Communications Headquarters (GCHQ) and the National Security Agency’s (NSA) origins can be traced to these encryption devices.”

Turning and his team of Bletchley Park codebreakers worked in secret to crack the Enigma code, building on the early work of polish mathematicians. Armed with the code, Turing ultimately developed his own computer, the Bombe. At the height of the war, 211 Bombe machines were built, cracking 3,000 German messages per day, according to the British Times.

The Bombe was an electromechanical device comprised of 36 individual Enigma machines. Each individual Enigma could be programmed to take assigned letters and mimic the encryptor’s 17,500 variable positions until it found a match, BT reported.

“There are rarely stories in last two centuries which have had a greater impact on modern technology and how society perceives it and its protagonists than this one,” Dick Schrader, global vice president at New Net Technologies, told Threatpost about Turing’s legacy, He added that current security professionals are still waging the same battles over encryption today as Turing was against the Enigma during the war.

“Using a programmable device to do the heavy lifting of mathematical operations can surely be seen the first hallmark of computing in modern history,” Schrader said. “Today, cybersecurity is often faced with the very same issues, just that our adversaries are usually not countries (and there’s no war), but we are here and put all our effort into finding technology-based solutions to problems caused by the very same technology used by attackers.”

Get the latest from John (Austin) Merritt, Cyber Threat Intelligence Analyst at Digital Shadows, Israel Barak, CISO at Cybereason and Limor Kessem, Executive Security Advisor at IBM Security on new kinds of attacks. Topics will include the most dangerous ransomware threat actors, their evolving TTPs and what your organization needs to do to get ahead of the next, inevitable ransomware attack. Register here for the Wed., Dec. 16 for this LIVE webinar.

The Zodiac’s serial killer’s 340 cipher, which couldn’t be solved for 50 years, has been cracked by a remote team of mathematicians.