The group blends into an environment before loading up trivial, thickly stacked, fraudulent financial transactions too tiny to be noticed but adding up to millions of dollars.

Researchers have identified a threat group that’s been quietly siphoning off millions of dollars from financial- and commerce-sector companies, spending months patiently studying their targets’ financial systems and slipping in fraudulent transactions amongst regular activity.

The Sygnia Incident Response team has been tracking the group, which it named Elephant Beetle, aka TG2003, for two years.

In a Wednesday report, the researchers called Elephant Beetle’s attack relentless, as the group has hidden “in plain sight” without the need to develop exploits.

Maybe Elephant Beetle doesn’t have exploits, but the attackers certainly don’t show up empty-handed. They rely on an arsenal of more than 80 unique tools and scripts to operate undetected “for vast amounts of time” as they patiently plant their bogus transactions, Sygnia said, “blending in with the target’s environment and going completely undetected while it quietly liberates organizations of exorbitant amounts of money.”

Elephant Beetle primarily focuses its attention on the Latin American market, but it doesn’t spare organizations that aren’t based there. Sygnia’s IR team recently discovered and responded to one incident at a company based in the U.S. that runs a branch in Latin America. “As such, both regional and global organizations should be on their guard,” Sygnia warned.

This beetle adores Java. The group is “highly proficient” with Java-based attacks and often targets legacy Java apps running on Linux machines – primarily, the Java-based web servers WebSphere and WebLogic – as a means of initial entry to a target environment, the researchers explained. Beyond that, Elephant Beetle even deploys its own, complete Java web application to do the gang’s bidding on compromised machines that are, meanwhile, chugging along, running legitimate apps.

But in a nutshell, here’s how the attack progresses:

The group exploits known vulnerabilities to infiltrate organizations, then uses the compromised servers to establish persistent vectors in the network and to pivot to credential harvesting and lateral movement.

“For example, the group leveraged the default password ‘manage’ of the privileged system user ‘sysadmin’ of WMS servers,” researchers detailed.

All of the quartet of flaws enable the actors to execute arbitrary code remotely via a specially crafted and obfuscated web shell.

The security firm gave the following example of a web request that was sent by the threat group to one of the victim’s SAP portals. It exploits the SAP ConfigServlet remote code-execution issue and contains a one-line command that creates a web shell.

In order to stay undetected for months at a time, Elephant Beetle lays low, engaged in low or no activity, and/or mimicks its surroundings by doing things like dropping the web shells into the resources folders of each web app, or by disguising themselves as fonts, images, CSS and JS resources, with similar names to original files in these folders – but with a ‘.JSP’ extension. 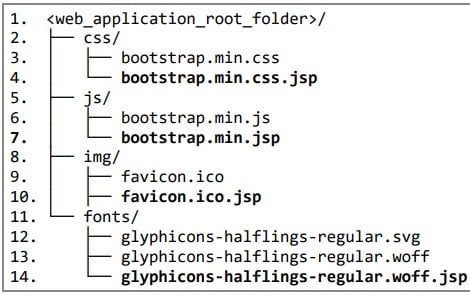 They ramp up when they’re ready to attack, using WAR archives to pack payloads. This tactic is considered to be “super-persistent” on some web servers, specifically WebSphere and WebMethods, “due to the fact that removal of the web shell files is insufficient, as the web pages are being loaded and held in the server’s process memory,” the researchers said.

Other tactics, techniques and procedures (TTPs) used by the group include:

Sygnia found a number of ties to Spanish-speaking countries:

Keeping up to date with patches is a no-brainer – particularly given how old the vulnerabilities are that Elephant Beetle is exploiting. Between that and other everyday security best practices, such as avoiding clear-text credentials used in scripts, Sygnia advised:

As well, organizations would be well-advised to proactively hunt for Elephant Beetle IOCs and TTPs, which it listed in its report, within their networks.