The AvosLocker ransomware gang is claiming that it breached tech giant Gigabyte and has leaked a sample of what it claims are files stolen from the Taiwanese company’s network. It’s offering to sell the rest.

On Wednesday, the gang posted a “press release” announcing that it had purportedly gutted the motherboard/server maker, though it didn’t say when or how. The leaked files, seen by PrivacySharks and by Threatpost, appear to contain confidential details regarding deals with third-party companies and identifiable information about employees.

Below is a screen capture of AvosLocker’s announcement, which refers to a nondisclosure agreement (NDA) between Gigabyte and Barracuda Networks. The NDA, which Threatpost has viewed, is dated June 2007 and signed on behalf of Barracuda by “Drako” – which, if authentic, presumably refers to Barracuda co-founder Dean Drako.

“Gigabyte INC suffered a breach, and this is a sample of the files we’ve downloaded from their network. Barracuda NDA + full dir list leaked in sample,” according to AvosLocker’s statement. 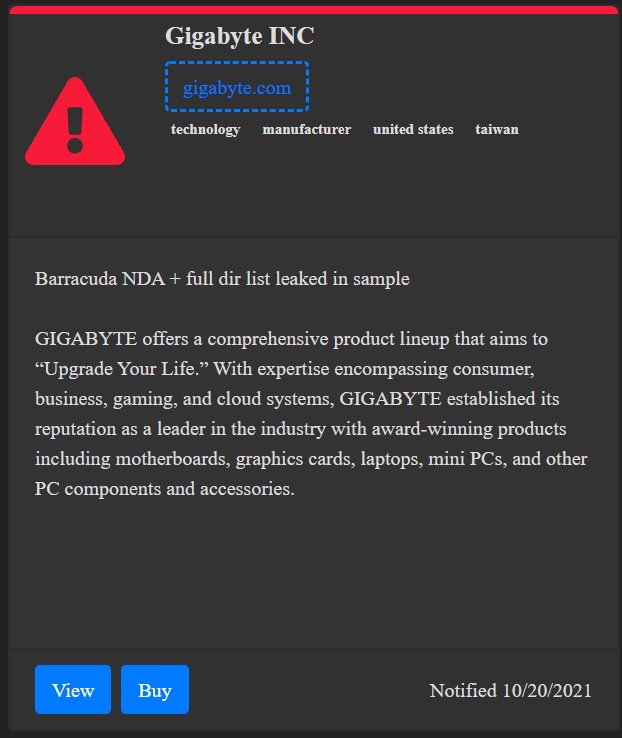 In a Thursday post, PrivacySharks said that an independent security researcher affiliated with the company has viewed the contents of a leaked 14.9MB file called “proof.zip” that was purportedly exfiltrated from Gigabyte.

The researcher said that it contains the following list of sensitive information:

PrivacySharks shared a number of screen captures showing file trees from the dump. Unless somebody pays to unlock the files, it’s anybody’s guess what’s actually in them, but according to Jake Williams, co-founder and CTO at incident response firm BreachQuest, the names suggest that the threat actor “focused on quality” – a departure from ransomware attackers’ typical focus on grabbing anything and everything.

“The details in the file tree should be extremely concerning to Gigabyte as they consider the impact of this breach,” Williams told Threatpost via email on Thursday. “In most double extortion schemes, the data theft focuses on quantity rather than quality. The file tree from this dump suggests that in this case, the threat actor focused on quality. … The file tree (directory listing) teased by AvosLocker certainly appears to be the kind of data that would be valuable to a multitude of cybercriminals.

Williams predicted that the apparent theft of contract details, such as the purported NDA with Barracuda, “will doubtlessly damage relationships with vendors and cause significant reputational losses for Gigabyte.”

Again, it’s difficult for outsiders to evaluate the value of trade secrets that may or may not be included in the dumps just based on file and directory names. Williams said that it’s a sure bet that  Gigabyte is now “feverishly evaluating the contents of the files in the directory listings and evaluating the impact of their probable release.”

Could Attack Set Off Supply-Chain Ripples?

Gigabyte designs and manufactures motherboards for both AMD and Intel platforms. It also produces graphics cards and notebooks in partnership with AMD and Nvidia, including Nvidia’s Turing chipsets and AMD’s Vega and Polaris chipsets. PrivacySharks suggested that if the leak turns out to include Gigabyte’s master keys – i.e., keys that identify hardware manufacturers as the original developer – threat actors could use them to  force hardware to download fake drivers, BIOS updates or more, as happened with SolarWinds.

At this point, PrivacySharks’ experts have only found two .KEY files and a few .CRT files, suggesting that “this breach contains no or very little data from the security/tech departments,” according to the writeup. “However, if Gigabyte revokes any keys in the near future, keep this possibility in mind,” PrivacySharks suggested.

Data Both Fresh and Stale?

If the leaked files turn out to be legitimate, some are from a fresh breach, with files dating as recently as May.

“This indicates that this is a fresh leak with new data,” according to PrivacySharks. “Not only this, but the date of the files means that some of the personally identifiable data (such as interviewees’ information, password and username credentials, etc.) could be up-to-date, and therefore, at risk of being compromised.”

Then again, they’re also old, as in, years old, which begs the question: Why are the files still kicking around?  Why, if these files are really Gigabyte’s data, did the company hang on to sensitive data for so long, instead of deleting it per rules such as the European Union’s General Data Protection Regulation (GDPR), Privacy Sharks asked.

“Some of the leaked data calls into question how Gigabyte stores and uses data,” the writeup suggested. “For example, we were particularly surprised to find a vast amount of identifiable data about job applicants, including CVs and resumes, which normally include personal data like dates of birth, email addresses, and phone numbers.

“As a rule of thumb, companies should not hold onto candidates’ data after the hiring process is over, and the Gigabyte data leak demonstrates why, as this information can fall into the wrong hands. For this reason, the EU has a GDPR law that requires companies to delete data like this.”

This will be Gigabyte’s second hit in a few months. In August, it was reportedly  the victim of a cyberattack from a ransomware outfit called RansomEXX, though the company didn’t identify the name of the attacker.

The attackers threatened to release 112GB of data that included valuable, confidential documents from Intel, AMD and American Megatrends. It’s not yet clear whether the August attack is connected to the recent attack by AvosLocker.

The amount of the ransom demand wasn’t released. Nor has there been any sign that Gigabyte paid whatever it was. At the time, Gigabyte told The Record that it had isolated the affected servers, notified law enforcement and started an investigation.

Oliver Tavakoli, CTO at AI cybersecurity firm Vectra, told Threatpost on Thursday that, while it’s hard to glean the extent of the AvosLocker breach from the sample, it doesn’t look to be as grave as the August breach. “It does not include signs of things which would be considered intellectual property,” he said via email. “The leak of HR-related files can certainly be embarrassing, but I don’t imagine that the promise not to leak them will fetch a significant ransom.”

You can’t blame the crooks for trying: Ransomware outfits apparently see computer makers as juicy targets willing to fork over beaucoup bucks. In May, REvil demanded $50 million in ransom from computer maker Acer. It went ahead with a copy-paste a month later, launching an audacious attack on Apple just hours before its splashy new product launch,  again demanding a fat $50 million payoff.

AvosLocker and Its Auction Gimmick

Earlier this month, the gang reportedly revamped its site to create a way to auction off the data of recalcitrant victims who refuse to pay ransom. It’s not the first ransomware gang to pull this stunt, which is meant to add yet another thumbscrew to the double-extortion gambit of not only freezing victims’ systems but also threatening to publish stolen data if they don’t pay up. In fact, other ransomware gangs cooked up the added pressure point in 2020, including the REvil ransomware gang.

But ransomware experts say that the threat of auction isn’t real and shouldn’t be taken seriously.

It’s just a form of victim intimidation, and a “very low-quality one” at that, according to Yelisey Boguslavskiy head of research at the cyber risk prevention firm Advanced Intelligence.

“This is simply a button on a website,” Boguslavskiy told Threatpost on Thursday.

“The underground auctions do exist – [the Exploit forum being] the most exemplary case,” he said. “However, in the years of the forum’s existence, there were never cases when actors came to Exploit with [offerings] similar to the ones which RaaS [ransomware as-a-service] groups make.”

To put it simply, “no one in the underground has offered stolen files, since this is not what the actors are willing to pay for,” Boguslavskiy said. “The auction button is completely fake. There is no chance anyone will use it simply because it is useless.”

Such attacks are coming from smaller groups or groups with mediocre skills who “believe that they can extort ransom by simply stealing and publishing the data on shame blogs,” he said. “However, such blackmailing only works as a force multiplier or an integral component of a larger holistic ransomware operation built around maximizing the risks for victims if they don’t pay.”

AdvIntel used Conti as an example: While the RaaS group steals data and threatens to publish it, Conti integrates the methodology into a larger context, which Boguslavskiy described as locking and encrypting the networks, removing backups, investigating networks for weeks to identify the most critical information and performing smart negotiations.

“In other words, a ransomware group can definitely leverage data exfiltration to get paid, however, only if they do it in a very smart, strategic and sophisticated way,” he explained. “And this is not the case with AvosLocker and/or 80 percent RaaS on today’s landscape (a big difference from 2019/2020 when more groups were like Conti).”

It’s like heart surgery, he said: “Groups like AvosLocker, REvil, or LockBit are trying to perform a surgery without having skills and tools, and as a result, they don’t get paid the ransom.”

“They do believe that a simple threat of dumping a set of files on a blog will force the victim to pay,” Boguslavskiy said, but that’s mostly because the media has been on a two-year scare fest about ransomware that, in reality, doesn’t stand up to the smell test.

“[It’s] simply not true,” he said, and that’s evidenced by the fact that large amounts of unimportant data from hundreds of companies get dumped on shame blogs of ransomware groups such as SunCrypt or LockBit.

What else are the crooks going to do with it, after all?

“They dump it there because they are not being paid. These groups expect huge payments as after stealing some files they feel omnipotent, but in reality, for them, it all ends up not with a bang but a whimper (to put it more poetically), when they are left with $0 on their account and have nothing else to do than dump files on TOR,” Boguslavskiy commented.