Researchers have uncovered a new worm targeting Linux based x86 servers, as well as Linux internet of things (IoT) devices (that are based on ARM and MIPS CPUs).

Of note, the malware utilizes GitHub and Pastebin for housing malicious component code, and has at least 12 different attack modules available – leading researchers to call it “Gitpaste-12.” It was first detected by Juniper Threat Labs in attacks on Oct. 15, 2020.

“No malware is good to have, but worms are particularly annoying,” said researchers with Juniper Threat Labs in a Thursday post. “Their ability to spread in an automated fashion can lead to lateral spread within an organization or to your hosts attempting to infect other networks across the internet, resulting in poor reputation for your organization.”

The malware will attempt to use known exploits for these flaws to compromise systems and may also attempt to brute force passwords, said researchers. After compromising a system, a main shell script is then uploaded to the victim machine, and starts to download and execute other components of Gitpaste-12.

This script sets up a cron job it downloads from Pastebin. A cron job is a time-based job scheduler in Unix-like computer operating systems. The cron job calls a script and executes it again each minute; researchers believe that this script is presumably one mechanism by which updates can be pushed to the botnet.

It then downloads a script from GitHub (https://raw[.]githubusercontent[.]com/cnmnmsl-001/-/master/shadu1) and executes it. The script contains comments in the Chinese language and has multiple commands available to attackers to disable different security capabilities. These include stripping the system’s defenses, including firewall rules, selinux (a security architecture for LinuxR systems), apparmor (a Linux kernel security module that allows the system administrator to restrict programs’ capabilities), as well as common attack prevention and monitoring software. 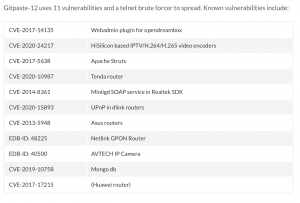 Gitpaste-12 also features commands allowing it to run a cryptominer that targets the Monero cryptocurrency.

Finally, the malware also contains a library (hide.so) that is loaded as LD_PRELOAD, which downloads and executes Pastebin files )https://pastebin[.]com/raw/Tg5FQHhf) that host further malicious code.

Researchers said they reported the Pastebin URL, as well as the Git repo mentioned above that downloads malicious scripts for the malware. The Git repo was closed on Oct. 30, 2020. “This should stop the proliferation of this botnet,” said researchers.

In terms of its worming capabilities, Gitpaste-12 also contains a script that launches attacks against other machines, in an attempt to replicate and spread the malware.

Another version of the script also opens ports 30004 and 30005 for reverse shell commands, said researchers. Port 30004 uses the Transmission Control Protocol (TCP), which is one of the main protocols in TCP/IP networks; while port 30005 is a bidirectional SOAP/HTTP-based protocol, which provides communication between devices like routers or network switches, and auto-configuration servers.

Worms can have a widespread impact, as seen in a 2019 campaign that exploited a vulnerability in the Exim mail transport agent (MTA) to gain remote command-execution on victims’ Linux systems, using a wormable exploit. Researchers said that currently more than 3.5 million servers were at risk from the attacks.

Several new worms have popped up in 2020 so far, including the Golang worm, which is aimed at installing cryptominers, and recently changed up its tactics to add attacks on Windows servers and a new pool of exploits to its bag of tricks.

In August, a cryptomining worm from the group known as TeamTNT was found spreading through the Amazon Web Services (AWS) cloud and collecting credentials. Once the logins are harvested, the malware logs in and deploys the XMRig mining tool to mine Monero cryptocurrency.