Google has released an update stomping out three critical-severity vulnerabilities in its Android operating system — one of which could result in “permanent denial of service” on affected mobile devices if exploited.

“The most severe of these issues is a critical security vulnerability in the Framework component that could enable a remote attacker using a specially crafted message to cause a permanent denial of service,” according to Google’s Monday update. That DoS flaw, CVE-2019-2232, has been addressed for devices running on versions 8.0, 8.1, 9 and 10 of the Android operating system, Google said.

The other two critical flaws (CVE-2019-2222 and CVE-2019-2223) exist in Android’s Media framework. This framework includes support for playing a variety of common media types, so that users can easily utilize audio, video and images. Android devices running on operating systems versions 8.0, 8.1,9 and 10 have been addressed for these two bugs, which could enable a remote attacker using a crafted file to execute code within the context of a privileged process. 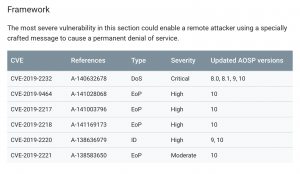 There are no current reports of these vulnerabilities being exploited in the wild.

Manufacturers of Android devices typically push out their own patches to address updates in tandem with or after the Google Security Bulletin.

A bulletin said a security update for Pixel devices, which run on Google’s Android operating system, is “coming soon.” Threatpost has reached out to Google for more details around this timeline.

Google’s update comes as out-of-date Android devices continue to face threats, including a new Android vulnerability disclosed this week, called “StrandHogg,” which could allow malware to pose as popular apps and ask for various permissions, potentially allowing hackers to listen in on users, take photos, read and send SMS messages.

In a security notice, the Multi-State Information Sharing and Analysis Center urged Android users to “Apply appropriate updates by Google Android or mobile carriers to vulnerable systems, immediately after appropriate testing” in accordance with the security update bulletin.