Google and Microsoft will implement ‘kill switches’ into their mobile offering in response to petitions from elected officials claiming that a similar Apple feature has deterred theft and violent crime.

These features will mimic those already available through the Activation Lock feature developed by Google and Microsoft primary rival, Apple, in iOS 7. A kill switch is defined as a feature that lets authenticated users remotely deactivate stolen devices, rendering such devices unusable.

There is a good reason the announcement is being made by a pair of government officials rather than by the Mountain View, Calif.- and Redmond, Wash.-based technology companies. This is because of the now one-year-old Secure Our Smartphones (S.O.S.) initiative. The project was undertaken by a conglomeration of international law enforcement agencies, elected officials, and consumer advocates, who claim that device-theft often leads to serious injury and even loss of life. 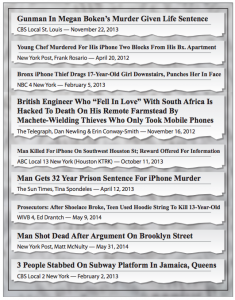 An analysis of the S.O.S. initiative to date [pdf] included findings suggesting that the implementation of Apple’s remote kill switch feature on iOS coincided with a substantial drop in iPhone theft over the last year. To the contrary, over the same period of time, the study claims, violent crimes perpetrated upon people carrying phones without a kill switch increased.

According to the report, in the first five months of 2014 in New York City, robberies and grand larcenies involving Apple products dropped 19 and 29 percent respectively, compared to the same period of time in the previous year. To put that in perspective, the overall decrease in all robberies in the city over the same period was 10 percent. Meanwhile, the theft of Samsung devices, which do not yet contain a kill switch feature increased by more than 40 percent.

Part of the impetus driving Google and Microsoft toward implementing the feature are a pair of bills that would require mobile devices have a kill switch feature. One of the bills was introduced by California state senator Mark Leno. It’s federal equivalent was introduced by Sen. Amy Klobuchar (D-MN) and Rep. Jose Serrano (D-NY).

“The commitments of Google and Microsoft are giant steps toward consumer safety and the statistics released today illustrate the stunning effectiveness of kill switches,” Schneiderman said. “In just one year, the Secure Our Smartphones Initiative has made tremendous strides towards curtailing the alarming trend of violent smartphone theft. We will continue the fight to ensure that companies put consumers’ safety first and work toward ending the epidemic of smartphone theft.”

The initiative was hamstrung from reaching its goal by staunch opposition from the wireless industry group CTIA. That group relented in its opposition of the initiative back in April, which apparently made today’s announcement possible.

Today’s announcement, the Attorney General’s office claims, means that a kill switch will be incorporated into the three dominant smartphone operating systems — Android, iOS, and Windows Phone — which currently encompass 97 percent of smartphones in the United States.