Google has released a new Transparency Report, this time pointing out sharp increases in the number of government requests from Brazil and Russia it received to remove content from Google-branded websites.

This is the seventh time the Mountain View-based company has released the report that provides details on how many countries have appealed to the company to remove potentially controversial content over a specific span of time.

Google’s Legal Director Susan Infantino broke down the numbers in a post on its blog Thursday. Complaints from Brazil are up, 697 in the second half of the year compared to 191 in the beginning of the year along with complaints from Russia, up 114 from six. Both of the increases stem from congressional shifts in those countries. Brazil held municipal elections last fall and half of that country’s requests called for the deletion of potentially defamatory candidate content. In Russia a new law was implemented that allows government authorities to blacklist and take down websites that contain content harmful to children. More than 100 of the requests from Russia pertained to that law.

Google has been releasing the reports every few months – already this year in January and March – in hopes of making it clear for users what governments are doing when it comes to censorship online. Google has made it clear that it’s receiving more and more requests to remove blog posts, especially those that contain politically tinged content, over time.

This version of the report is the first where Google has begun breaking down exactly when it blocked and unblocked certain videos on YouTube in particular countries. 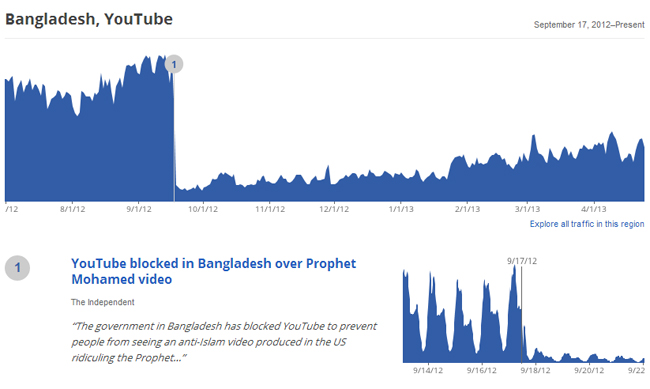 As part of one request, Google responded to 20 countries that wanted a controversial movie deleted from YouTube. Google went on to restrict clips from Jordan, Malaysia and other nations and temporarily restricted views for the video in Egypt and Libya. The film, “Innocence of Muslims”  has fostered a vicious fight over freedom of speech and censorship online since its release last summer. It has also been the motive for a string of denial-of-service attacks against a number of leading U.S. banks.

“While the videos were within our Community Guidelines, we restricted videos from view in several countries in accordance with local law after receiving formal legal complaints,” Infantino wrote.

The report is the third of its kind for Google this year and follows similar reports from Twitter in January and Microsoft in March regarding the disclosure of information requests via law enforcement. The reports are being seen as a welcome trend in the security industry; as Threatpost editor Dennis Fisher put it last month, “it’s time for these disclosures to become as commonplace as quarterly earnings reports.”

If three reports in four months from Google – even if each one is breaking down relatively the same information – is a sign, it’s looking like it’s a promising trend.