Threat actors are buying and selling taxpayer data on hacker forums as well as using phishing and other campaigns to steal various U.S. government payouts.

Threat actors are using a combination of scams to obtain as well as buy and sell credentials for U.S. taxpayers to steal appropriations from the COVID-19 relief package as well as 2020 tax refunds, new research has found.

Researchers from Secureworks Counter Threat Unit (CTU) have observed an increase in various threat activity against taxpayers as well as on underground hacker forums aimed at fraudulently obtaining these various government payouts, they said in a report. Some of these efforts trace back to tax preparation services that dispose of customer hard copy paperwork insecurely via the trash. Customer data culled from that paperwork then ends up on illicit online markets where it is bought and resold.

In late March, the U.S. government passed a $2 trillion stimulus package in the form of the CARES Act, aimed at helping companies affected by the business shutdown during the coronavirus pandemic. The package includes $1,200 in individual taxpayer payments to those who qualified, representing a new opportunity for fraud alongside the usual tax-season campaigns that threat actors typically employ.

The scams observed by Secureworks CTU come in several forms, according to researchers. One is an attempt to get taxpayers to give up their information and create phony tax forms in advertisements shared on social media and other online platforms, they said.

Other attacks were more typical phishing campaigns, in which threat actors used emails with attached phishing pages disguised as the IRS tax forms required for stimulus checks, they said. 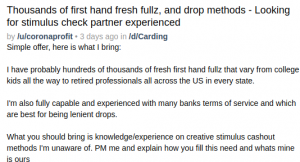 “The threat actor can use the submitted information to impersonate the victim on IRS tax forms and obtain the victim’s tax return and stimulus check,” according to the post.

One such scam shows threat actors flogging hundreds of thousands of what are called “fullz,” which in underground forums means a full set of personal data, as well as other critical data of deceased U.S. citizens that can be used to file phony tax returns and steal payouts, researchers said.

In another underground forum post, an English-speaking threat actor known as “DoctorZempf” is selling data claimed to have been obtained by searching tax preparers’ trash dumpsters. The data can be used to steal identities and apply for a victim’s stimulus relief check or to craft socially engineered email campaigns against customers to commit similar fraud, the hacker claimed.

To avoid falling victim to these emerging taxpayer threats, CTU researchers cited a link to sample phishing emails posted by the IRS so people can inform themselves and avoid fraud.

CTU researchers also recommended typical security best practices—such as multi-factor authentication and up-to-date security encryption–so clients can avoid these scenarios. They also advised victims to report any fraudulent activity to the IRS as well as a credit agency to mitigate damage.

Indeed, threat actors typically ramp up their game during tax time, but the COVID-19 pandemic also has inspired a surge in threat activity, particularly with the lure of more financial reward. Another program linked to the CARES Act—the Economic Injury Disaster Loan—also may have exposed 8,000 small-business applicants to fraud by threat actors with a data leak recently.