A new downloader, which has been spotted in an array of recent email campaigns, uses anti-analysis techniques and calls in a system fingerprinting module.

A newly discovered downloader malware has been discovered as part of a new campaign primarily targeting financial institutions.

Researchers at Proofpoint said today that the downloader – dubbed “Marap” after its command-and-control phone-home parameter, “param,” spelled backwards – is notable for its focused functionality and modular nature, as well as its ability to perform reconnaissance through a systems-fingerprinting module.

“As defenses become more adept at catching commodity malware, threat actors and malware authors continue to explore new approaches to increase effectiveness and decrease the footprint and inherent ‘noisiness’ of the malware they distribute,” researchers said in Thursday’s post about the new malware. 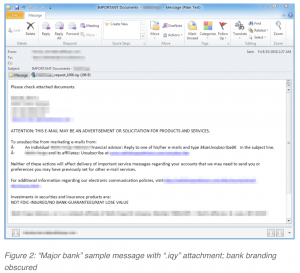 Many of the campaigns would purport to be from the sales department, important documents from a major unnamed bank or invoices from a random display name (such as  “netadmin@[random domain]”).

The email attachments contain malicious macros for executing the Marap malware, which is written in C and contains a few notable anti-analysis features, researchers said.

One of these features is API-hashing, a commonly used process in malware to prevent analysts and automated tools from determining the code’s purpose. The process means that most of the Windows API function calls are resolved at runtime using a hashing algorithm, which is this case appears to be custom to Marap, said researchers.

Secondly, the malware uses timing checks at the beginning of important functions, which can hinder debugging and sandboxing. “If the calculated sleep time is too short, the malware exits,” the researchers explained.

Marap uses HTTP for its C&C communication (although first it tries a number of legitimate WinHTTP functions to determine whether it needs to use a proxy, and if so, what proxy to use).

After command execution, a response message can be sent back to the C&C, which includes the bot ID, command, command ID, flag controlling response type, command status code and response data.

Marap is modular and flexible, enabling bad actors to download other modules and payloads. The most notable  observed add-on was a systems-fingerprinting module being sent over from the C&C — which is a DLL module — to  gather and send back an array of information to the server.

Marap is indicative of malware becoming more flexible and adopting new tactics to help bad actors evade analysis and add new capabilities, researchers at Proofpoint said: “This new downloader… points to a growing trend of small, versatile malware that give actors flexibility to launch future attacks and identify systems of interest that may lend themselves to more significant compromise.”