The flaws all ultimately depend on different ways of executing side channel attacks to siphon data from impacted systems – and result in four different attacks: ZombieLoad, Fallout, RIDL (Rogue In-Flight Data Load) and Store-to-Leak Forwarding.

“As a result of the flaw in the architecture of these processors, an attacker who can execute malicious code locally on an affected system can compromise the confidentiality of data previously handled on the same thread or compromise the confidentiality of data from other hyperthreads on the same processor as the thread where the malicious code executes,” Eric Maurice, director of security for Oracle, recently wrote in an advisory.

MDS Different Than Meltdown and Spectre

The flaws derive from a process called speculative execution in processors. This process –thrown into the spotlight after the 2018 Spectre and Meltdown flaws came to light – is used in microprocessors so that memory can read before the addresses of all prior memory writes are known.

However, while speculative execution side channel attacks – like Spectre and Meltdown – targeted data stored in the CPU’s memory; MDS instead refers to issues related to microarchitectural structures of the Intel processors other than the level 1 data cache (where memory is stored). Those issues exists in components called buffers, such as Fill Buffers (temporary buffers between CPU caches), Load Ports (temporary buffers used when loading data into registers) or Store Buffers (temporary buffers to hold store addresses and data).

Meanwhile, an array of independent researchers from VUSec, CISPA, Graz University of Technology, and more have developed attacks for these vulnerabilities. Those proof-of-concept attacks were also disclosed Tuesday in coordination with Intel, after mitigations were developed.

Those four different attack vectors are dubbed ZombieLoad, Fallout, RIDL (Rogue In-Flight Data Load) and Store-to-Leak Forwarding. While these attacks are all based on speculative execution targeting the buffer component of CPUs, they all work in different ways, exploit different flaws and result in different impacts.

The most severe of these attacks is dubbed ZombieLoad, which attacks CVE-2018-12130, the flaw in the Fill Buffer of Intel CPUs. That’s because this attack leaks the most data – attackers are able to siphon data from system applications, operating system and virtual machines. According to a research paper released on Tuesday, researchers said that disabling hyperthreading is the “only possible workaround to mitigate ZombieLoad on current processors.”

ZombieLoad was discovered and reported by Michael Schwarz, Moritz Lipp and Daniel Gruss from the Graz University of Technology (known for their previous discoveries of similar attacks, including Meltdown) as well as researchers from KU Leuven, Cyberus Technology and the Worcester Polytechnic Institute.

Only Intel is Impacted (That We Know)

It appears at this time that Intel is the only manufacturer whose chips are impacted. AMD and ARM have both made public statements that the attacks and vulnerabilities related to MDS do not affect their chips.

In a statement, AMD said: “At AMD we develop our products and services with security in mind. Based on our analysis and discussions with the researchers, we believe our products are not susceptible to ‘Fallout’ or ‘RIDL’ because of the hardware protection checks in our architecture. We have not been able to demonstrate these exploits on AMD products and are unaware of others having done so.”

According to Intel’s microcode update guidance, most Intel Core and Xeon chips dating back to 2011 are theoretically vulnerable to MDS-related flaws.

While Intel has provided CPU microcode updates, and recommendations for mitigation strategies for operating system (and hypervisor) software, the company recommends users install the software updates provided by your operating system and/or hypervisor vendor. An array of vendors have released separate security advisories in response to MDS, including Red Hat, Oracle, Apple, Google and Microsoft.

“Microsoft has released software updates to help mitigate these vulnerabilities,” according to a Microsoft advisory released Tuesday. “To get all available protections, firmware (microcode) and software updates are required. This may include microcode from device OEMs. In some cases, installing these updates will have a performance impact. We have also acted to secure our cloud services.”

To completely address these issues, Intel said that there are additional opt-in mitigations to disable hyper threading and enable microcode-based mitigations for all processes by default.

News that Intel’s fix for ZombieLoad will slow CPU performance has ignited concerns that people will be dissuaded to update their machines. It was a similar case when Spectre and Meltdown fixes were first introduced in 2018. 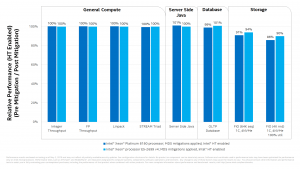 For instance, in a security release Apple said that in tests it found “as much as a 40 percent reduction in performance with tests that include multithreaded workloads and public benchmarks” depending on the system.

Intel for its part has a much smaller performance hit estimate: Foe example, in a Core i9 9900K with Hyper-Threading disabled, the company said that the hit could be as little as 9 percent on select data center workloads post-mitigation, for instance.

How can People Know if Their Systems are Impacted?

Researchers said that it is “very likely” that Intel chip users’ systems are impacted by the MDS vulnerabilities and subsequent attacks.

“Our attacks affect all modern Intel CPUs in servers, desktops and laptops,” said Fallout researchers in a post. “This includes the latest 9th-generation processors, despite their in-silicon mitigations for Meltdown. Ironically, 9th-generation CPUs are more vulnerable to some of our attacks compared to older generation hardware.”

Researchers also made a tool, available here, to discover whether their systems are impacted.

The incident shows that side channel speculative execution attacks continue to plague Intel chips since the Spectre and the related Meltdown vulnerability were disclosed in 2018. For instance, in May 2018, in May, a new vulnerability was found called Variant 4, disclosed by Google Project Zero and Microsoft’s Security Response Center; researchers said it potentially enables attackers to read privileged data across trust boundaries.

Meanwhile, a new Spectre-class exploit, dubbed SpectreRSB, was detailed by researchers from the University of California at Riverside in a research paper in July; while in August, three new speculative execution design flaws in Intel CPUs were disclosed, impacting Intel’s Software Guard Extensions (SGX) technology, its OS and system management mode (SMM) and hypervisor software.