Researchers say that Google’s Gmail application for iOS fails to perform a task called certificate pinning under certain conditions, which could expose the users of affected devices to man-in-the-middle attacks capable of monitoring encrypted email communications.

Google told Threatpost in an email interview that this research does not constitute a vulnerability in the Gmail application because of the level of user interaction required to trigger an exploit.

“Several months after providing responsible disclosure, Google has not provided information regarding resolution and it still remains an open vulnerability,” said Michael Shaulov, CEO and co-founder of Lacoon Mobile Security. “This vulnerability leaves iPhone and iPad users at risk of a threat actor being able to view and modify encrypted communications through a Man-in-the-Middle attack”

For its part, Google doesn’t consider this a vulnerability.

“This is not a vulnerability in the Gmail app,” a Google spokesperson told Threatpost. “The scenario that Lacoon raises would require a user to take explicit action — specifically, purposefully installing a malicious Root Certificate Authority that gives a hacker access to their app. Messages you send through Gmail app on iOS are safely transferred through Google’s servers unless you’ve intentionally reconfigured your device.”

The alleged vulnerability does not affect Gmail applications on Google’s Android or any other operating system. Nor does it impact Gmail users that access their email on iOS through Apple’s Mail application.

Bashan claims Lacoon unexpectedly found the bug during an ongoing analysis of security on Apple’s iOS mobile platform. He claims an attacker could perform a MitM without any indication to the victim.

“We were quite surprised by this finding because Google had implemented certificate pinning for their Android Gmail app,” Bashan wrote. “Clearly, not implementing this for iOS was an oversight by Google.”

Per Lacoon’s explanation, the following four steps are required to exploit this vulnerability to create a MitM: 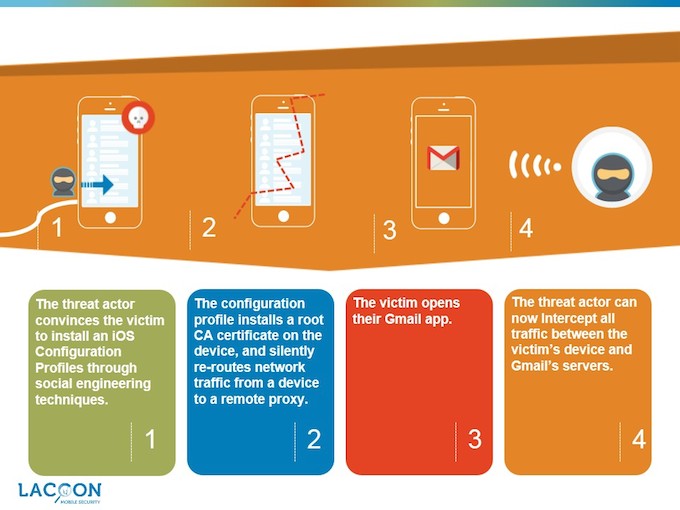 Collin Mulliner, a researcher at the SecLab at Northeastern University, confirmed to Threatpost in an email that the attack would work, but called it impractical because the victim would have to install the iOS configuration profile.

“If you require actual user interaction to perform an attack it gets harder,” Mulliner said. “Also no automated attacks are possible here, you cannot just intercept traffic of any device but first have to target each user to have them install the ‘bad’ configuration file.”

The attack, which prevented Translink users from using their metro cards or buying tickets at kiosks, is the second from the prolific threat group just this week.

The videoconferencing giant has upped the ante on cybersecurity with three fresh disruption controls.