Microsoft has announced it will change the way it classifies adware by beginning to block unwanted and intrusive advertisements from users.

Microsoft has announced this summer it will change the way it classifies adware by beginning to block unwanted and intrusive advertisements from users.

New objective criteria drafted up by the company stipulates that by July 1 internet ads must have a visible close button and must clearly state who’s behind them, or they’ll be branded as adware.

A blog post by Michael Johnson, a researcher at the company’s Malware Protection Center, described the changes in a blog entry Thursday afternoon.

According to Johnson advertisements must adhere to the following rules, or they “will be detected as adware and immediately removed from the user’s machine:” 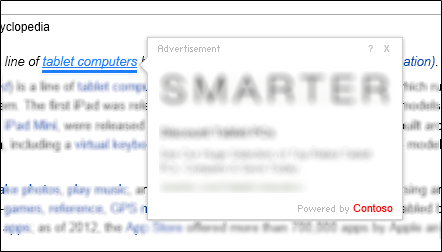 Currently when Microsoft’s security products detect a program is operating suspiciously, the program is allowed to run, and the user is alerted and then given a recommended option to proceed. On July 1 when adware is found, Microsoft will stop the program entirely, notify the user and give them the option to restore it if they want.

Going forward users will also be given the option to uninstall whatever program is making the ads – providing of course the program has an uninstall entry in the Windows control panel.

The efforts are being implemented partly to better provide users with choice and control but also to give developers a three-month time period to ensure their programs comply with Microsoft’s new rules.

“We believe that it will make it easy for software developers to utilize advertising while at the same time empowering users to control their experience,” Johnson wrote of the new criteria yesterday.