Across six apps, the spyware managed to spread to 196 different countries.

An Android spyware dubbed MobSTSPY has managed to ride trojanized apps to a widespread, global distribution, mainly via Google Play.

The malware masquerades as a legitimate application purporting to be things like flashlights, games and work productivity tools. While it’s not uncommon to come across weaponized fare in third-party app stores, MobSTSPY is notable for having managed to also infiltrate Google Play with at least six different apps over the course of 2018.

“Part of what makes this case interesting is how widely its applications have been distributed,” said Trend Micro researchers Ecular Xu and Grey Guo, in a posting on Thursday. “Through our back-end monitoring and deep research, we were able to see the general distribution of affected users and found that they hailed from a total of 196 different countries.” 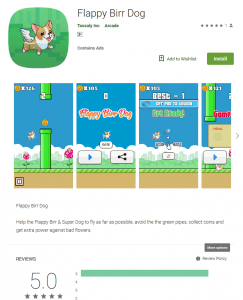 These run the gamut from Mozambique to Poland, Iran to Vietnam, Algeria to Thailand, Germany to Iraq and so on.

The Google Play apps specifically were Flappy Birr Dog, FlashLight, HZPermis Pro Arabe, Win7imulator, Win7Launcher and Flappy Bird, all of which appeared last year and are now gone from the store. Some were downloaded more than 100,000 times by users from all over the world.

In terms of capability, the bad code is mainly an information-stealer, though it has a unique phishing aspect as well.

When it comes to the former, it lifts data like user location, text messages, contact lists, call logs and clipboard items; and, the malware is capable of stealing and uploading files found on the device. Trend Micro observed that it uses Firebase Cloud Messaging (FCM) to communicate with its command-and-control (C&C) server, and that it exfiltrates data depending on which command it receives.

It also collects useful device information in a beginning step, such as the language used, its registered country, package name, device manufacturer and so on, which can be used to “fingerprint” the device for follow-on social engineering or exploit attacks.

“It sends the gathered information to its C&C server, thus registering the device,” the researchers said. “Once done, the malware will wait for and perform commands sent from its C&C server through FCM.”

In addition to its info-stealing capabilities, the malware can also gather additional credentials through a phishing attack. It displays fake Facebook and Google pop-ups asking for the user’s account details; if they’re entered, it returns a “log-in unsuccessful” message that might not raise a red flag for a user.

“[The case of MobSTSPY] demonstrates that despite the prevalence and usefulness of apps, users must remain cautious when downloading them to their devices,” noted the Trend Micro researchers. “The popularity of apps serves as an incentive for cybercriminals to continue developing campaigns that utilize them to steal information or perform other kinds of attacks.”

Google Play malware is relatively rare, but this is of course not the first time that malware has evaded the Google Play filters and policies. In November, a booby-trapped Android app called Simple Call recorder was taken down — after being available for download for almost a year. The main purpose of the malware was to trick the user into installing an additional app, which purported to be an Adobe Flash Player Update.

And in 2017, Google booted 700,000 apps from Google Play for violating marketplace policies. Not all of these were malware however – most of them purposely copied a more popular app or served up inappropriate content.

The issue of course is that when malicious applications are taken down, people who already have them on their smartphone are not notified of the issue – so it’s likely that millions of users still have various malware installed on their device. A study conducted by the Pradeo Lab in November 2018 in fact showed that 89 percent of malicious applications that were deleted from stores are still installed on active devices, six months after their deletion.