Tech advances are accelerating the use of facial recognition as a reliable and ubiquitous mass surveillance tool, privacy advocates warn.

Somewhat quietly over the past couple of years there has been a flurry of breakthroughs in biometric technology, led by some leapfrog advances in facial recognition systems.

Now facial recognition appears to be on the verge of blossoming commercially, with security use-cases paving the way.

Last week, SureID, a fingerprint services vendor based in Portland, Ore., announced a partnership with Robbie.AI, a Boston-based developer of a facial recognition system designed to be widely deployed on low-end cameras.

The partners aim to combine fingerprint and facial data to more effectively authenticate employees in workplace settings. And their grander vision is to help establish a nationwide biometric database in which a hybrid facial ID/fingerprint can be used for things such as fraud-proofing retail transactions, or, say, taking a self-driving vehicle for a spin.

Some big questions about privacy, civil rights and civil liberties loom on the immediate horizon – and still must be fully addressed. But there is no denying that facial recognition has leapt to the front of the pack of alternative biometric authentication methods.

Some of the most interesting advances are unfolding in the area of identifying individuals acting naturally in front of a surveillance camera. Robbie.AI, for instance, is honing a system tuned to recognized human emotion.

“Your face provides strong biometric cues, even if you dye your hair,” says Karen Marquez, Robie.AI’s chief executive officer. “Iris and retina are somewhat intrusive alternatives, as you need to place yourself close to the sensors, and that’s not a natural.” 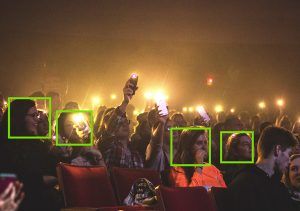 SARF is capable of identifying people with heavy makeup, under poor lighting conditions and when portions of a face are obstructed by a cellphone.

SAFR was rolled out with little fanfare at two Seattle pilot schools earlier this year. It combines  commodity video surveillance cameras and PCs with facial recognition software supplied by RealNetworks. The system instantly recognizes teachers, administrators and parents. It open security doors for them and alerts security officers whenever a surveillance camera catches sight of an unauthorized adult on school property.

“The level of accuracy that we, and others, have been able to achieve far surpasses what was possible three years ago,” says Vance. “We can now tell you whether or not somebody who’s in front of a camera is who they’re asserting to be. We can find them out of millions of people in a database in a fraction of a second.”

Robie.AI and RealNetworks are by no means alone pushing facial ID systems into the commercial market. Google, Apple, Facebook and Microsoft have poured vast resources into theoretical research in the related fields of artificial intelligence, image recognition and face analysis. And the tech giants have openly shared key findings intending to accelerate the entire field.

At a basic level, facial recognition software revolves around applying algorithms to the 2D or 3D images of a human face in a way that correlates the contours of the eyes, nose, lips, ears, chin and numerous other variables. Thanks to advances in sensors, processing power, data analytics and neural networks, face detection and face matching processes have become very fast even as accuracy has continued to steadily improve.

Illustration shows how law enforcement submits a “probe photo” of an unknown person from source such as an ATM camera to conduct face recognition searches in a criminal investigation.

The first generation of facial recognition systems actually have been in wide use for years at airports and border crossings, used primarily by border control officers and law enforcement agencies to catch criminals and deter terrorists. Their use for security access in other public settings, such as schools and workplaces, appear to be part of a natural progression.

RealNetwork’s system, for instance, derives from the streaming technology it pioneered for media players in the 1990s, combined with images amassed via its RealTimes free app that let’s users build photo slideshows. Customers photos and videos were used, with their permission, to train RealNetworks’ facial recognition engine, which maps 1,600 data points for each face.

SAFR is tuned to identify people walking past a video cam who aren’t looking squarely at the lens. It can delineate a variety of skin tones and distinguish nuances based on gender, age and geography.

“The algorithm that we’ve developed really relates back to our expertise from the 1990s of being able to scan video,” Vance explains. “We were able to operate in extreme conditions back then, with not a lot of bandwidth to work with . . . we developed technologies to pick the right image out of a stream of video to compare against a database.”

It is become much clearer how facial ID systems hold the potential to be used much more routinely in secure access and law enforcement scenarios. And as public acceptance spreads, biometric innovations, pivoting off of facial IDs, are likely to utilized in retailing,  public transportation and even healthcare, to do things like support a patient’s pain management routine and even detect genetic diseases.

Buttressing this growth scenario, Allied Market Research earlier this month issued a report projecting that the “image recognition market” will rise from $17.91 billion in 2017 to $86 billion in annual revenue by 2025, a compounded annual growth rate of 22 percent. Allied’s researchers noted that facial ID systems will be a big driver of that  growth with both law enforcement and general commercial uses growing dramatically over that span.

The partnering of SureID and Robbie.AI embodies the path many experts believe lies ahead for commercial uses of the coming generation of facial recognition technologies. By integrating Robbie.AI’s leading-edge facial ID technology with SureID’s network of fingerprinting kiosks, now used to authenticate employees, the partners are taking aim at a sky-high goal, Marquez says. 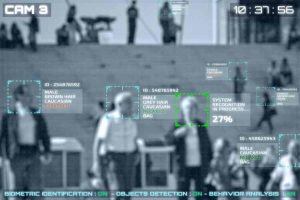 They hope to supply the building blocks for a nationwide biometrics gathering system — one that can be widely shared to support broad consumer-focused initiatives, much as the tech giants shared results of their theoretical studies.

“This partnership can be a huge first step in developing holistic human biometric solutions that can protect us all against spoofing, impersonation, fraud and cybercrime,” she says. “This includes everything from replacing logins, passwords and registration codes to responding to customer issues the moment they occur.”

Marquez envisions a hybrid facial ID/fingerprinting system capable of alerting victims, in real time, as they are being targeted online by fraudsters. Other obvious use cases would be to provide real-time authentication to access autonomous vehicles or to control IoT devices in a smart home.

“Facial recognition and fingerprinting technologies have been around for years and if used correctly they are more secure than any written credential,” she says.

Before wider commercial uses of facial IDs can take root, one looming non-technical issue must be addressed: privacy. Jay Stanley, senior policy analyst for the American Civil Liberties Union, acknowledges that the average citizen has become much more accepting of always-on surveillance cams feeding a system that is continually assessing them.

“Right now everybody knows that when you walk down the street you’re recorded by a lot of video cameras, and that the video will just sit on some hard drive somewhere and nothing really happens to it unless something dramatic goes down,” observes Stanley. “The ultimate concern with this technology is that we’ll end up in a surveillance society where your I.D. is your face, and everybody is checking on you at every moment, monitoring you.” 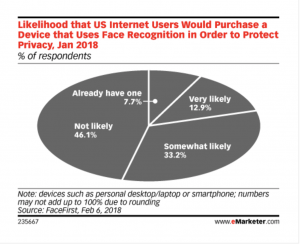 With wider commercial use comes the potential for those in power to abuse the technology, Stanley says. “We’re talking about an enormously powerful surveillance capability that no government has ever had in the history of humanity.”

Privacy advocates need look no further than China to stoke their fears. China’s President Xi Jinping has been moving aggressively to possess moment-to-moment surveillance and assessment capability over Chinese citizens. China has rolled out a national surveillance network comprised of 200 million cameras, roughly four times the number in the U.S., and plans to have 300 million cameras in place by 2020, according to a report in the New York Times.

China says it is using this surveillance net to track down criminals and scofflaws, including jay walkers, whose punishment is to have their faces displayed on giant outdoor digital screens alongside lists of names of people who don’t pay their bills.

The developments in China have not been lost on the U.S. tech community, which is rightly concerned about how sort of authoritarian abuse might disrupt the fledgling facial ID market in the U.S. In July, Microsoft’s president and chief legal officer Brad Smith did something this corporate executives very rarely do: he actually called for federal oversight. “We live in a nation of laws, and the government needs to play an important role in regulating facial recognition technology,” Smith wrote in a blog post.

RealNetworks’ Vance worries that more and more states might individually pass privacy regulations that would result in a patchwork of restrictions. Washington state, for instance, passed a 2017 law requiring companies to inform state residents before collecting biometric data and detailing what the data will be used for, much as required across the European Union.

“I think it’s very important for people to come together and really understand how the technology is going to be used, but then also create ethical guidelines around that to ensure peoples’ rights are being considered when these policies are put into place,” Vance says.

Marquez, the Robbie.AI chief executive, agrees that well-defined limits are in order. “Companies must lead the process by being transparent,” she says. “Facial recognition by itself can be a major advancement in data analysis and consumer protection in so many areas. Understanding the benefits and defining a framework for respecting civil rights is essential.”

The proposed law comes as police departments around the country for their use of facial recognition to identify allegedly violent Black Lives Matter protesters.

Amazon has placed a moratorium on police use of its facial recognition platform – but a congressman asked if that extends to its Ring smart doorbell in a new inquiry.