Researchers said that they discovered new Mirai samples in February 2019, capable of infecting devices powered by a broadened range of processors.

New samples of the Mirai malware have been identified, targeting an array of embedded processors and architectures within connected devices.

While it’s not the first time Mirai’s targeting of new processor architectures has expanded – samples targeting Argonaut RISC Core (ARC) CPUs were discovered in January 2018 –the development shows that Mirai developers continue to expand their targets to incorporate a growing array of IoT devices, researchers with Palo Alto Network’s Unit 42 group said in a Monday post.

The Mirai samples also are capable of infecting Tensilica’s Xtensa processors, which range from small low-power microcontrollers up to neural network processors; and OpenRISC project based-open source CPUs, several of which are also known to run on FPGAs. 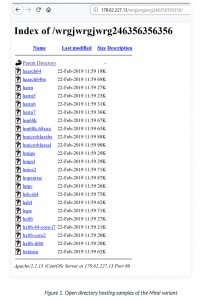 “Expanding Mirai-like malware to new architectures will only cause further headaches for those responsible for mitigating botnet activity,” Troy Mursch, owner of Bad Packets Report, told Threatpost. “Given that the source code for Mirai has been open source for years now, this was inevitable. As for the impact of this ‘expansion’ we’ll have to wait and see. DDoS attacks from Mirai-like botnets continue to plague the internet with some recently reaching nearly 40 Gbps in size.”

The latest samples were discovered being hosted in an open directory on a single IP. The samples contained exploits that were known to be used in previous versions of Mirai.

“The presence of these exploits in both previous versions of Mirai and our newly discovered samples help show the tie between the two are likely used by the same attacker in this case,”  researchers said.

“This is because the targeted devices do not get patched and become re-infected by Mirai-like malware over and over,” he said. “CVE-2017-17215 is notable as it was used by the Satori botnet and infected hundreds of thousands of Huawei devices. The author of that botnet is now under indictment by the FBI.”

On Feb. 22, the server was updated to hide the file listing, researchers said. A full list of Indicators of Compromise (IoCs) are available on their blog post.

Mirai is best known for being used in a massive, unprecedented DDoS attack that compromised more than 300,000 IoT devices to take down major websites in 2016.

Variants of Mirai continue to pop up as cybercriminals tap into a growing rate of vulnerable Internet of Things devices. In September, researchers discovered new variants for the infamous Mirai and Gafgyt IoT botnets targeting well-known vulnerabilities in Apache Struts and SonicWall; and in March researchers said that a new Mirai variant was targeting TV and presentation systems used by enterprises.