NVIDIA certificates are being used to sign malware, enabling malicious programs to pose as legitimate and slide past security safeguards on Windows machines.

Two of NVIDIA’s code-signing certificates were part of the Feb. 23 Lapsus$ Group ransomware attack the company suffered – certificates that are now being used to sign malware so malicious programs can slide past security safeguards on Windows machines.

The Feb. 23 attack saw 1TB of data bleed from the graphics processing units (GPUs) maker: a haul that included data on hardware schematics, firmware, drivers, email accounts and password hashes for more than 71,000 employees, and more.

Security researchers noted last week that malicious binaries were being signed with the stolen certificates to come off like legitimate NVIDIA programs, and that they had appeared in the malware sample database VirusTotal.

The signed binaries were detected as Mimikatz – a tool for lateral movement that allows attackers to enumerate and view the credentials stored on the system – and for other malware and hacking tools, including Cobalt Strike beacons, backdoors and remote access trojans (RATs) (including a Quasar RAT [VirusTotal] and a Windows driver [VirusTotal]).

Both of the stolen NVIDIA code-signing certificates are expired, but they’re still recognized by Windows, which allow a driver signed with the certificates to be loaded in the operating system, according to reports.

According to security researchers Kevin Beaumont and Will Dormann, the stolen certificates use these serial numbers:

“Signing certificates are the keys computers use to verify trust in software,” he told Threatpost via email on Monday. “Validating code signatures is a critical step in securing the global code supply chain, and it protects everybody from average consumers running Windows Updates (where signatures are validated automatically) to developers using software components in larger projects (where signatures are hopefully checked as part of the CI process).”

The dire situation is somewhat mitigated due to the stolen certificates having expired, he said in an email on Monday, but that’s not a perfect solution. “This will make it easier for anti-malware applications to identify malicious code signed with these certs, but there is still the challenge of Microsoft’s operating systems accepting them as valid even past their expiration,” he said.

Bisson noted that given NVIDIA’s massive install base – its technology shows up everywhere from gaming to crypto miners to industrial and scientific super-computing – a supply chain attack targeting users could have “enormous implications.”

He pointed to global power consumption as one yardstick of how NVIDIA’s hardware is slathered across the world: “Some estimates peg crypto as consuming over half a percent of the world’s annual electric generation on its own,” he said, “most of that related to power-hungry Nvidia processors dependent on Nvidia’s software signed by these keys.”

NVIDIA’s hardware is critical for gaming and media production, as well as cloud-based artificial intelligence (AI) and machine-learning (ML) that powers everything from voice assistants, image and video processing (including automated moderation), and manufacturing quality control systems, Bisson pointed out.

He suggested that the fix for supply-chain threats is to establish a new chain of trust in NVIDIA’s software development workflow with new certificates. “Upstream certificate authorities can revoke Nvidia’s old certificates to block installation of any potentially compromised software with those certificates,” he explained. “As always, intrusion detection and access control audits are critical to preventing new intrusion attacks, while enforcing signed commits and continuous automated code scanning for secrets, dependency vulnerabilities, along with manual testing are solid steps to ensuring the security of their software.”

How to Block the Signed Malware

David Weston, director of enterprise and OS security at Microsoft, tweeted on Thursday that admins can keep Windows from loading known, vulnerable drivers by configuring Windows Defender Application Control policies to control which of NVIDIA’s drivers can be loaded.

That should, in fact, be admins’ first choice, he wrote.

WDAC policies work on both 10-11 with no hardware requirements down to the home SKU despite some FUD misinformation i have seen so it should be your first choice. Create a policy with the Wizard and then add a deny rule or allow specific versions of Nvidia if you need

David Weston, Microsoft vice president for OS Security and Enterprise, went on to tweet the attributes to be blocked or allowed.

These are all the attributes you can block or allow on: pic.twitter.com/3BV3QoMuMX

A better approach would be for Microsoft to recognize the certificates as expired and no longer accept them as legitimate, he told Threatpost.

On Feb. 27, Lapsus$ claimed that it had been in NVIDIA’s systems for a week, that the gang isn’t state-sponsored and that it’s “not into politics AT ALL” – a clarification that’s apparently important for cybercrooks now that the Russia/Ukraine cyber war zone is burning at fever pitch.

Last Wednesday, March 2, the compromised-email notice site Have I Been Pwned put up an alert regarding 71,335 NVIDIA employees’ emails and NTLM password hashes having been leaked on Feb. 23, “many of which were subsequently cracked and circulated within the hacking community.”

As has been noted, at least on the face of it, that number of 71,000 compromised employee accounts – a number that the graphics processing units maker hasn’t confirmed or denied – doesn’t make sense. In its most recent quarterly report (PDF), NVIDIA only listed a workforce of 18,975.

But, given that the Telegraph’s initial report cited an insider who said that the intrusion “completely compromised” the company’s internal systems, it could be that the stolen data included former employees.

Lapsus$ demanded $1 million and a percentage of an unspecified fee from NVIDIA for the Lite Hash Rate bypass.

Lapsus$ also demanded that NVIDIA open-source its drivers, lest Lapsus$ do it itself. 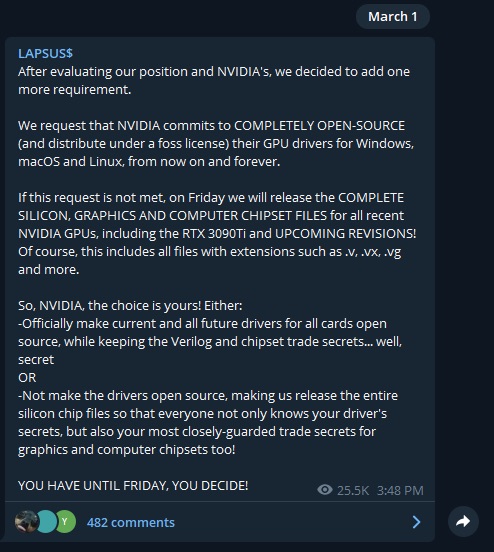 Who Is Lapsus$ Group?