The campaign, codenamed “Bad Tidings,” has sought out victims’ credentials with clever fake landing pages pretending to be the Saudi Arabian Ministry of Interior’s e-Service portal.

An ongoing three-year-old phishing campaign has been targeting the credentials of Saudi Arabian government agencies — with a financially motivated actor the likely culprit.

While the campaign has been ongoing since November 2016, researchers with Anomali said that in the past few months, the number of phishing landing pages has suddenly spiked.

Since it first started in 2016, the campaign has used a total of 95 unique phishing host names to target its victims.

These were created as part of the campaign to impersonate the aforementioned Absher, which represents close to 60 percent of the Saudi-related phishing sites. The e-Service portal helps users with employment, passports, civil affairs, traffic services and more.

The phishing landing pages in the campaign would typically contain two web pages: A fake homepage, and a login page.

The fake login pages appear to display the legitimate account access portal for Absher – however, when users provide their user ID and password, they are redirected to the initial phishing landing page without logging into the intended resource.

“Typically, at this stage the phishers have stolen the user’s credentials and are likely to sell them on underground markets or use them to impersonate the victim to commit fraudulent actions,” researchers said.

“We have observed the attackers creating sites using either a single or combined technique of punycode-based spoofing attacks, typosquatting or sub-domain spoofing attacks,” researchers said.

Researchers said that to trick users, the websites that were created were using slightly misspelled domain names (a technique called “typosquatting,” which registers domains that can be confused for the legitimate site or brand name by incorporating hard-to-spot spelling or grammatical errors); subdomain spoofing, using alternative top level domains (TLDs) (i.e., near-identical URL names that use something other than the legitimate gov.sa suffix), or punycode-based sites to masquerade as the real portal. Punycode is a method of representing International Domain Names in local language characters, which are normally limited by letters or hyphens when supported by DNS. 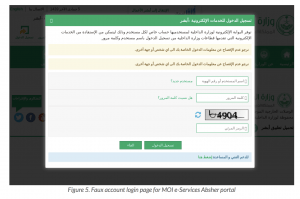 “For example, the Absher portal is a web page located underneath the website https://www.moi.gov.sa/; however, malicious actors have appropriated the brand name ‘Absher’ to create typosquatting domains with misspellings and wrong TLDs e.g. abshr[.]xyz or simply wrong TLDs e.g. absher[.]space,” said researchers.

“Online government portals offering citizen services remain attractive targets, as they store vast amounts of personal and sensitive information in a centralized location and if compromised, can provide malicious actors with enough data for resale on underground markets or to commit fraudulent actions such as identity theft,” the researchers said.