Behind the attacks is the KovCoreG Group, best known for distributing Kovter click-fraud malware. The campaigns, spotted by researchers at Proofpoint, also impacted a number of other major websites that used the TrafficJunky advertising network that was exploited by the adversaries. The ad network works primarily with adult-themed websites, based on a review of its marketing material.

The chain begins with a malicious redirect hosted on avertizingms[.]com, which inserts a call hosted behind KeyCDN, a major content delivery network. Once the adversary qualifies a victim by browser and geographic region, a malicious ad “delivers a page containing heavily obfuscated JavaScript identical to that used by Neutrino and NeutrAds,” researchers said.

Researchers cautioned, there are no links between those behind the Neutrino exploit kit and KovCoreG other than some shared code used by a possible common coder.

“Despite dramatic declines in exploit kit activity over the last year, malvertising remains a profitable enterprise for actors who can achieve sufficient scale and deliver malware effectively in a landscape where vulnerable machines are increasingly scarce,” researchers said. To improve infection rates criminals have turned to advanced filtering techniques and social engineering over the use of exploits.

“The runme.js file associated with the fake Chrome update and beacons back to the same server hosting the social engineering scheme. This adds an extra layer of protection against replay or study,” researcher said. 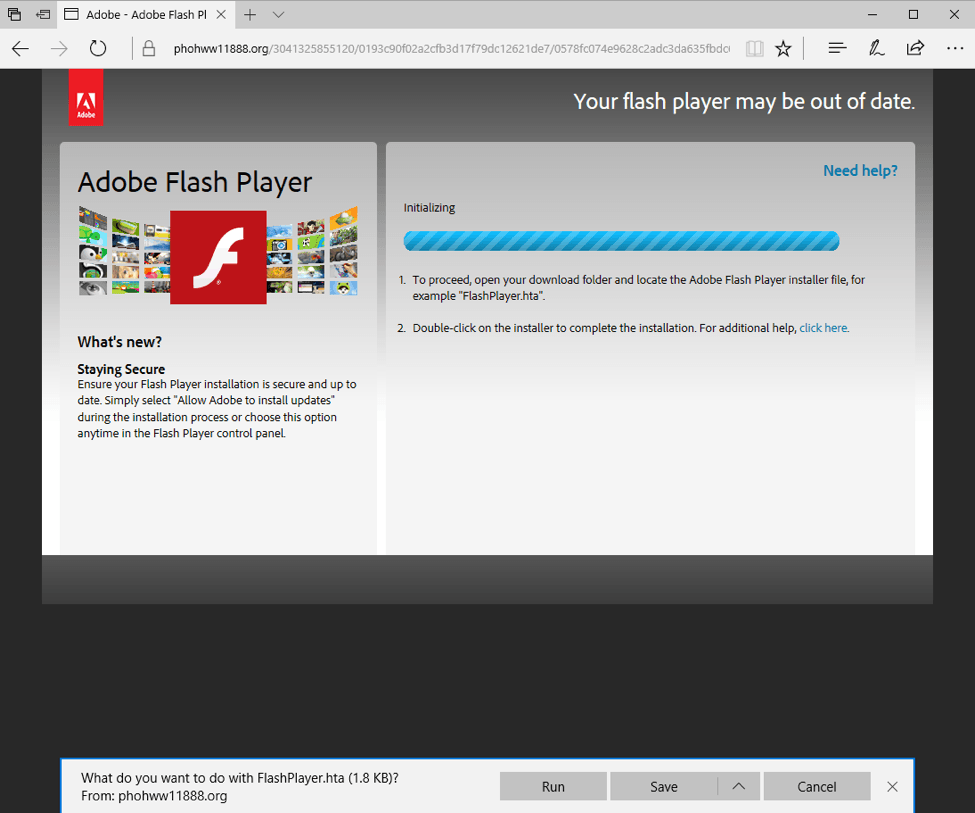 Firefox browser users are presented with a similar “Critical Firefox update” webpage with a download dialog box asking “would you like to save this file” that if initiated will drop a firefox-patch.js file. Microsoft Edge and Internet Explorer browsers receive fake Adobe Flash Player update messages such as “your flash player may be out of date” that drops a FlashPlayer.hta file after a click.

“This campaign uses clever social engineering to trick users into installing fake updates that appear as soon as they visited a page containing a malicious ad,” Proofpoint researchers said. “Once users clicked on what they thought was an update file, they may not have even noticed a change in their systems as the malware opened an invisible web browser process, clicked on ads, and generated potential revenue for cybercriminals.”

Researchers said the JavaScript targeting browsers downloads “flv” and “mp4” files. “The flv file contains ‘[704][rc4 key]’. The mp4 file is an intermediate payload, encrypted with the rc4 key from the flv file and then hex-encoded. ‘704’ here is likely the internal campaign ID,” said researchers.

The intermediate payload is itself more JavaScript, Proofpoint said. It includes an encoded Powershell script that embeds shellcode that downloads and launches an “avi” file which is actually the Kovter payload.

“While the payload in this case is ad fraud malware, it could just as easily have been ransomware, an information stealer, or any other malware. Regardless, threat actors are following the money and looking to more effective combinations of social engineering, targeting, and pre-filtering to infect new victims at scale,” note researchers.