Woman who helped hide Edward Snowden faces uncertain future and says she has no regrets.

LEIPZIG, GERMANY – Refugee families located in Hong Kong that helped shelter Edward Snowden in 2013 are under crushing pressure to cooperate with local authorities or face deportation to their countries of origin, where they face an uncertain fate. However, despite years of what their lawyer calls intimidation and harassment by Hong Kong authorities, the refugees said they have no regrets in helping whistleblower Snowden in June 2013.

“[Snowden] needed help and we helped him. And, yes, I would help him again,” said Vanessa Rodel, via a remote video link to a session here at 35c3. Rodel is one of two families Snowden stayed with in Hong Kong after leaving the United States. It was in Hong Kong where Snowden communicated with media outlets about the leaked secret documents that exposed the United State’s spying techniques. 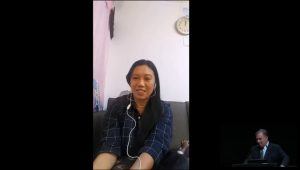 “I don’t get any assistance from the Hong Kong government from 2016 on – when the government started questioning me about Edward Snowden,” Rodel said. “I told [authorities] I couldn’t answer any questions until I talked to my lawyer. After that, they stopped my assistance. It has become very hard for me to survive. It is not safe for me to live here in Hong Kong. I hope to move to Canada soon for my safety and freedom.”

Two families (four adults and three stateless children) make up what is known as the “Snowden refugees”.  For the past two years the families have been mostly stripped of their humanitarian support. Currently, Rodel is in the process of appealing against the Hong Kong government’s previously rejected asylum applications.

Since 2016, Tibbo said things have become more difficult for him as well. Tibbo said that Hong Kong authorities were building an erroneous criminal case against him and at the same time withholding portions of fees owed to him by the courts dating back to 2012. He said he left the country in Nov. 2017 when he was told police visited his home looking for him.

“They have made it harder for me to serve my clients, but not impossible,” he said.

Meanwhile, asylum claims for the Snowden refugees have been filed through the Quebec Government. They are now before the Minister of Immigration, Tibbo said. Unfortunately, it is unclear when ruling by the Canadian government will come, Tibbo said. Those familiar with the matter suspect both the Hong Kong and Canadian government are being indirectly pressured by United States not to take immediate action in the matter of the Snowden refugees.

“The Snowden refugees represent something every government is afraid of,” Tibbo said. “They have the moral strength and conscience to do the right thing despite being deprived of everything in Hong Kong. They don’t fear the government and are willing to protect whistleblowers. They represent a form of transparency and accountability.”

Copious impassioned appeals to the Canadian government have been made, including one by Oliver Stone. In July he sent an open letter urging Canada to grant the Snowden refugee asylum.

“Accepting these brave families will demonstrate to the world that Canada is a beacon of hope in these uncertain times,” Stone wrote.

Meanwhile, Tibbo said the Canadian government is procrastinating, citing a need to screen the cases first. That could take up to 52 weeks, he said.

During a question-and-answer round with Rodel an attendee asked, if you could go back in time would you help Snowden again? “I always say yes. I wanted to help him. For me it was the right thing to do. I didn’t do anything wrong. I just helped him. Yes, I would help him again.”

The NSA argued its mass surveillance program stopped terrorist attacks – but a new U.S. court ruling found that this is not legal, and may have even been unconstitutional.

This removal, of 32K accounts, is not the first time Twitter has taken action to protect its users from influence operations. Researchers weighed in on the practice with Threatpost.