Using the Software Security Framework (SSF) introduced in October, we interviewed nine executives running top software security programs in order to gather real data from real programs.Our goal is to create the Building Security In Maturity Model (BSIMM) based on these data, and we’re busy going over what we’ve built with the executives who run the nine initiatives (stay tuned here for more).

Using the Software Security Framework (SSF) introduced in October, we interviewed nine executives running top software security programs in order to gather real data from real programs.Our goal is to create the Building Security In Maturity Model (BSIMM) based on these data, and we’re busy going over what we’ve built with the executives who run the nine initiatives (stay tuned here for more).

In the course of analyzing the data we gathered, we unearthed some surprises that we covered in a previous column. In this column we begin to dig into the maturity model itself, starting with a discussion of nine software security activities that all of the programs we studied carry out as part of their initiatives.

Of the twenty-four large-scale software security initiatives we are aware of, we chose nine that we considered the most advanced. Our nine organizations are drawn from three verticals: financial services (4), independent software vendors (3), and technology firms (2). You can find some data about the organizations we study here.

To refresh your memory, the table below shows the SSF. There are twelve practices organized into four domains. There are three practices under each domain. Note that the BSIMM describes objectives and activities for each practice.

Step two was to unify the bullet lists into “buckets.” Once again the goal was to abstract from the current data and to fuse the lists of activities into one list for each practice. During the merging process, we tracked the number of times that an activity showed up in all nine organizations. For example, under the Strategy and Metrics practice one of the items on the bucket list was “started with process, evolved over time and widely used” which we observed in four of the nine organizations.

Step three involved building a preliminary set of levels, one for each practice from the bucket lists. Once again, each investigator performed this step independently and we merged our results (often going back and checking against raw data, buckets, and bullet lists). The final product of step three what we call the BSIMM skeleton.

The BSIMM skeleton covers 110 activities, each paired directly with an objective. Activities are sorted into the 12 practices of the SSF. For example, the Strategy and Metrics practice includes eleven activities. The activities in each practice are ranked into three maturity levels. Our approach is to identify goals for each level of a practice, which can be further split into objectives for the practice/level and are in this way associated with activities. This helps with business-level decisionmaking around a software security initiative. We will release the entire BSIMM model which includes an explanation of all 110 activities in early March 2009.

Nine Things Everybody Does

Without further ado, the nine activities that nine successful real software security initiatives carry out. We include the BSIMM “tag” for each activity in the heading.

In order to build support for software security throughout the organization, the Software Security Group (SSG) plays an evangelism role (as opposed to an audit role). This internal marketing function helps the organization understand the magnitude of the software security problem and the elements of its solution. The SSG might give talks for internal groups, extend invitations to outside speakers, author white papers for internal consumption, or create a collection of papers and other resources on an internal Web site.

The SSG acts as a focal point for addressing regulatory requirements and customer-driven security requirements. The SSG guides the rest of the organization by creating policy. The policy provides a unified approach for satisfying the (potentially lengthy) list of external security drivers. As a result, project teams can avoid learning the details involved in regulations or suggested by compliance bodies such as SOX, PCI DSS, HIPPA or FFIEC. Likewise, project teams don’t need to re-learn customer security requirements on their own. The SSG policy documents are sometimes focused around major compliance topics such as the handling of personally identifiable information or the use of cryptography.

The SSG provides awareness training in order to promote a culture of security throughout the organization. Training might be delivered by members of the SSG, by an outside firm, by the internal training organization, or through a computer-based training system. Course content is not necessarily tailored for a specific audience. For example, all programmers, quality assurance engineers, and project managers could attend the same Introduction to Software Security course.

In order to make a strong and lasting change in behavior, training includes material specific to the company’s history. When participants can see themselves in the problem, they are more likely to understand how the material is relevant to their work and to know when and how to apply what they have learned. One way to do this is to use noteworthy attacks on the company as examples in the training curriculum.

Some problems are best solved only once. Rather than have each project team implement all of their own security features, the SSG provides proactive guidance by building and publishing security features for other groups to use. Project teams benefit from implementations that come pre-approved by the SSG, and the SSG benefits by not having to repeatedly track down the kinds of subtle errors that creep into features such as authentication, role management, audit/logging, key management, and cryptography.

The SSG takes a lead role in performing architecture analysis in order to begin building the organization’s ability to find design flaws. Architecture analysis is enough of an art that the SSG needs to be proficient at it before they can turn the job over to the architects. The SSG cannot be successful on its own either — they will likely need help from the architects or implementers in order to understand the design. With a clear design in hand, the SSG might carry out the analysis with a minimum of interaction with the project team.

The organization uses one or more black box security testing tools as part of the quality assurance process. The tools are valuable because they encapsulate an attacker’s perspective, albeit in a generic fashion. Tools such as IBM/Rational AppScan or HP WebInspect are relevant for Web applications, and fuzzing frameworks such as PROTOS are applicable for most network protocols. In some situations other groups might collaborate with the SSG to apply the tools. For example, a testing team could run the tool but come to the SSG for help interpreting the results.

Here is how the nine activities are presented in the BSIMM skeleton (complete with objectives and activity tags). Remember, there are 110 activities in BSIMM and here we’ve covered only nine activities that everybody does. 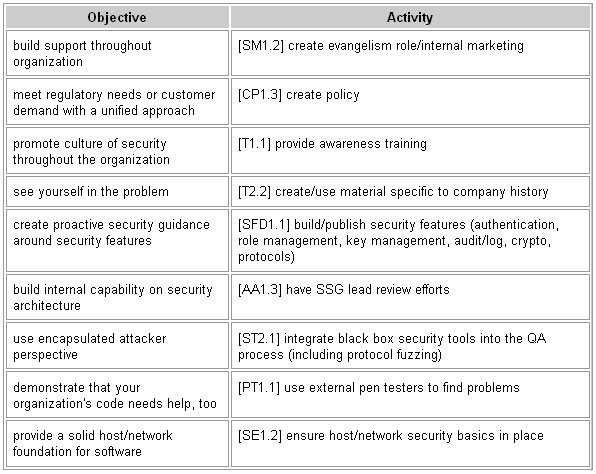 The problem with this list of nine core activities is that four of the twelve practices in the SSF have no representative activities in the list above. That’s the way the cookie crumbles. Turns out there are no activities that everyone does in the four practices in question (Attack Models, Standards and Requirements, Code Review, and Configuration Management and Vulnerability Management).

The next step in our process is to go over the complete BSIMM with the nine companies we worked with and work out any kinks. As soon as that process is complete, we’ll be ready to release the BSIMM to the public.

*Gary McGraw is the CTO of Cigital, Inc., a software security and quality consulting firm with headquarters in the Washington, D.C. area. He is a globally recognized authority on software security and the author of eight best selling books on this topic. His titles include Java Security, Building Secure Software, Exploiting Software, Software Security, and Exploiting Online Games; and he is editor of the Addison-Wesley Software Security series.

Ethical hackers so far have earned nearly $300K in payouts from the Apple bug-bounty program for discovering 55 bugs, 11 of them critical, during a three-month hack.

The Shiny Hunters hacking group said it stole 500 GB of data from the tech giant’s repositories on the developer platform, which it owns.