While lawmakers in the U.S. debate new laws that would give media companies powerful new legal weapons to stop the distribution of copyrighted content online, a new survey of Americans finds that most admit to having pirated content themselves – and don’t see any problem with it.

While lawmakers in the U.S. debate new laws that would give media companies powerful new legal weapons to stop the distribution of copyrighted content online, a new survey of Americans finds that most admit to having pirated content themselves – and don’t see any problem with it.

The survey of 2,300 adults was sponsored by The American Assembly – a public policy group affiliated with Columbia University and conducted by Princeton Research. Researchers found that some 46 percent of American adults have bought, copied, or downloaded unauthorized music, movies, or television shows, and 70 per cent of 18 to 29 year-olds had done so. Thirty percent of those who admitted to pirating music and other media said they did so “regularly.” 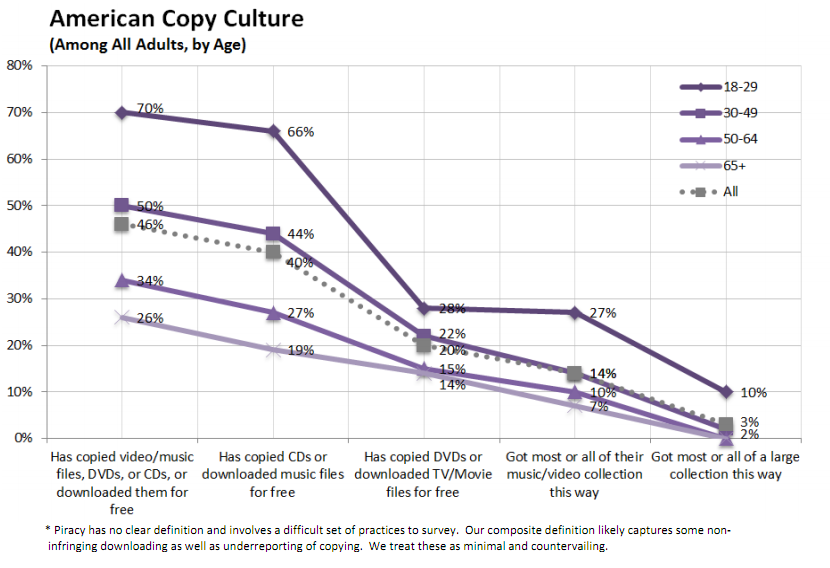 And, contrary to the hard line on media piracy voiced by proposed legislation like the Stop Online Piracy Act (SOPA), those polled saw a lot more gray around the issue of copying music and other media. For example, a strong majority said that they felt sharing music was acceptable with family members (75 percent of those surveyed) and friends (56 per cent of those surveyed). The dissemination of copyrighted materials to a network beyond family and friends received very little support in the study, suggesting that respondents didn’t view all kinds of copying in the same way.

Similarly, the percentage of people who admit to having some small amount of illegally obtained content is relatively high, but a significantly lower percentage of the individuals poled reported that the majority of their digital content was acquired by illegal means.

Public consciousness regarding piracy is at an all-time high as the US Congress and Senate consider the controversial Stop Online Piracy and PROTECT IP Acts respectively. While slim majorities of American Internet users agreed that copyright infringement should be a punishable offense, they overwhelmingly oppose enforcement when it is perceived as an intrusion on personal rights, particularly with regards to exorbitant fines, Internet monitoring and disconnection. The adjudication of such cases should involve the courts rather private companies, respondents said. At the same time, when asked whether ISPs or the Government should be allowed to block access to sites in order to prevent infringement, ISPs received vastly more support. When they surveyors substituted the word ‘censoring’ for ‘blocking,’ support dropped substantially.

Finally, the survey suggested that most respondents were happy to abstain from pirating media when other options existed. The availability of online streaming services, they said, made it less likely that they’d make illegal copies of music or movies.

The preliminary findings from the survey, with more details and numbers on specific types of piracy, can be found here. We’ve also posted some interesting graphs and images from the survey over on our Tumblr.

A bug in the popular anti-piracy framework allows a side-channel attack on premium content.