Spam numbers were up by 2.1% in May from the previous month, accounting for 82.9% of global email traffic according to SecureList’s May 2011 spam report.

Spam numbers were up by 2.1% in May from the previous month, accounting for 82.9% of global email traffic according to SecureList’s May 2011 spam report.

The big story last month, however, was the exploitation of Osama bin Laden’s death by scammers of all kinds. Malware distributors were the first on the bandwagon with pharmaceutical spammers following close behind, luring their victims into clicking malicious links and downloads that promised, but didn’t actually lead to Osama bin Laden death photos and Google Earth shots of his now infamous compound in Abbottabad, Pakistan.

In general though, phishing emails dropped by .01%, accounting for .02% of all email traffic in May. PayPal remains first among organizations targeted by phishers, receiving 62% of phishing attempts.

The 82.9% monthly average is nearly identical to the previous year, when spam accounted for 83% of global email traffic. On May 7, spam dropped to the lowest point of the month at 72%, but on May 29 spam peaked at 91%. 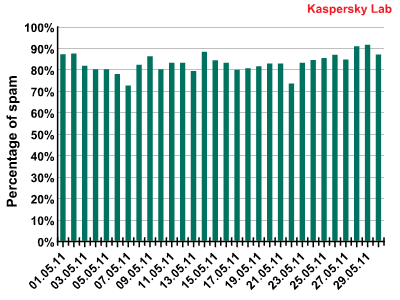 Malicious files were found in 4.1% of all emails, which was an increase of 0.45% from the previous month.

India remains the largest source of Spam in the world. In May, that country generated 11.35% of the world’s spam, which was a 1.4% decrease from the previous month. On the whole though, there was very little change in the distribution of outgoing spam traffic by country, and according to SecureList, this lack of change suggests that spam source rankings are beginning to stabilize.

For a more in depth analysis, you can find the entire SecureList May 2011 spam report here.