Scammers are taking full advantage of the launch of Google’s new TikTok competitor, YouTube Shorts, which has turned out to be an awesome tool for feeding billions of engaged viewers stolen content. That content is being used to run rackets like promoting adult dating websites, hustling diet pills and selling marked-up goods, researchers warned.

YouTube Shorts is still in beta, but that’s still given scammers plenty of time to migrate their best TikTok-tested flimflams over to the Google universe, conveniently already populated by billions of users.

Tenable analyst Satnam Narang has been studying social media for more than a decade and found that scammers are having wild success lifting TikTok’s most viral videos and using them on YouTube Shorts, to get viewers to click on a variety of sites and links.

Narang analyzed 50 different YouTube channels and found as of December, they had racked up 3.2 billion views across at least 38,293 videos stolen from TikTok creators. The YouTube channels reached more than 3 million subscribers, he added.

“Please note this is not an exhaustive list, so the figures shared here are likely an undercount of the true numbers of views, videos and subscribers amassed by scammers using stolen content from TikTok,” Narang added.

TikTok challenges like “Wear It Big” and “Why Aren’t You in Uniform” have already racked up billions of views, so serving them to a new Google user base has proved an effective way for fraudsters to supercharge existing TikTok hustles. 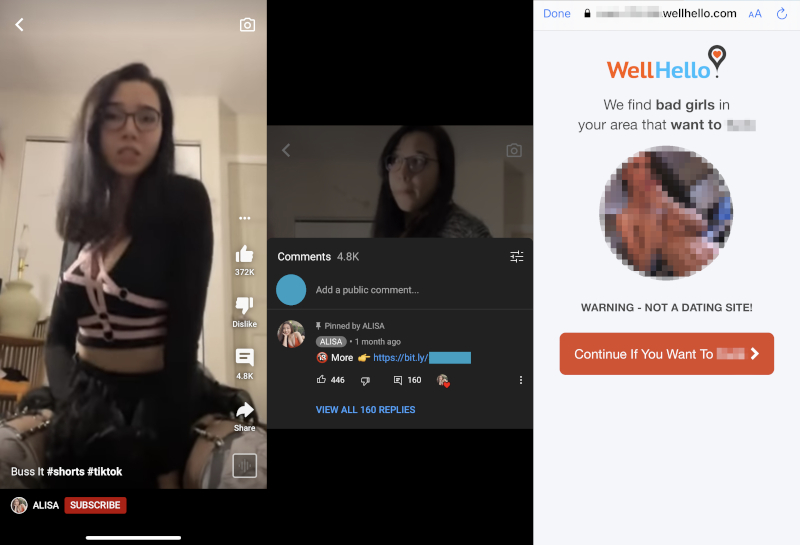 “While adult-dating scams proliferate across many platforms, the introduction of YouTube Shorts, with its enormous potential reach and built-in audience, is fertile ground that will only serve to help these scams become even more widespread,” Narang explained. “This trend is alarming because of how successful these tactics have become so quickly on YouTube Shorts, based on the volume of video views and subscribers on these fake channels promoting stolen content.”

YouTube Shorts viewers were also served advertisements alongside viral TikTok workout videos for trending products — like the pants simply known as “the leggings” across social media. Outfitted with a seam up the back to enhance even the flattest posterior, the famous leggings were being sold on YouTube Shorts at a markup by scammers hoping the fresh crop of shoppers won’t notice the padded price, Narang found.

“For instance, I found a similar pair of leggings on AliExpress offered for $12 less than on the Fashion Leggings page,” he said. “The major concern with these advertisements is that scammers cannot guarantee the item being purchased will arrive or arrive as advertised.”

Besides the magic pants, workout-related content stolen from TikTok is used to sell to sell weight-loss programs, diet pills and more, asking for credit-card details.

Another scam takes advantage of an affiliate program with a lucrative payment structure to push a smoothie diet. Narang estimated scammers could get up to $100 for every customer who ultimately bought into the program: 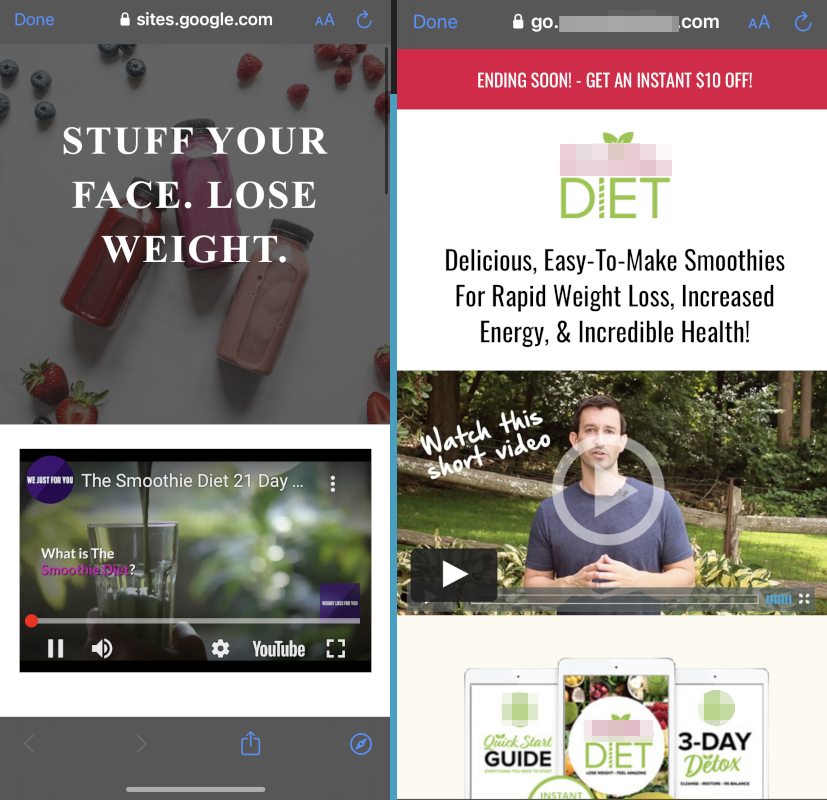 Popular TikTok videos are also being used across YouTube Shorts just to build engagement and follower counts, which Narang explained is a form of social-media currency that is used to sell advertising and earn affiliate money for views.

“For example, one user has received over 78 million views on their channel, but if you look at a breakdown of their actual content, it’s the videos that they did not create that have the greatest engagement numbers,” Narang said. “There are also a number of YouTube channels that have been created solely as hubs for stolen TikTok content, similarly, to gain social currency.”

He added that the fraud also puts legitimate content creators at an unfair disadvantage.

“As a platform, YouTube provides creators with avenues to make money through advertisements and brand deals that are often tied to subscriber counts,” Narang said. “As YouTube and other platforms have sought to penalize creators and channels for fake engagement, scammers are using stolen TikTok videos to gain social currency using content that doesn’t belong to them.”