The latest malware from TA505 has been seen targeting banks, retailers and restaurants with two different versions.

A new backdoor named ServHelper has been spotted in the wild, acting as both a remote desktop agent as well as a downloader for a RAT called FlawedGrace.

According to Proofpoint, the prolific cybercriminal gang known as TA505 developed ServHelper, which has two variants: one focused on remote desktop functions and a second that primarily functions as a downloader. It’s named after the file names that are associated with the infection; and, a sample from one campaign used command and control (C2) URIs containing “/rest/serv.php.”

The primary motive is, as usual, financial: “TA505 appears to be actively targeting banks, retail businesses, and restaurants as they distribute these malware families,” said Proofpoint researchers, in a posting this week.

Researchers said that the remote desktop version, a.k.a. the “tunnel” variant, was seen in November spreading via a few thousand spam messages that contained Microsoft Word or Publisher attachments with macros that, when enabled, download and execute the malware. This version focuses on setting up reverse SSH tunnels to allow the threat actor to access the infected host via Remote Desktop Protocol (RDP).

“Once ServHelper establishes remote desktop access, the malware contains functionality for the threat actor to hijack legitimate user accounts or their web browser profiles and use them as they see fit,” according to Proofpoint. 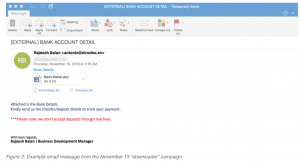 A similar campaign consisting of tens of thousands of email messages surfaced later in November, according to Proofpoint. In addition to financial institutions, this campaign also targeted the retail industry. The messages also contained Microsoft Word or Publisher attachments with macros, along with Microsoft Wizard attachments. This campaign used the downloader variant of ServHelper, the researchers said. The version is stripped of the tunneling and hijacking functionality and is used as a basic downloader.

In December, TA505 mixed it up with another downloader-variant campaign. It targeted retail and financial services customers again, but this time used a mixture of Microsoft Word attachments with embedded malicious macros; PDF attachments with URLs linking to a fake “Adobe PDF Plugin” webpage (which linked to the malware); and direct URLs in the email body linking to a ServHelper executable. It also added a new malware payload.

“In this campaign, we observed ServHelper download and execute an additional malware that we call FlawedGrace,” according to Proofpoint. “FlawedGrace is a robust remote access trojan (RAT) that we initially encountered in November 2017, but have rarely observed since.”

Per the malware’s debug strings, the last significant development of FlawedGrace took place during the end of 2017. The ServHelper campaigns were distributing version 2.0.10 of the malware, which is related to the more widely known FlawedAmmy RAT.

In general, it appears that TA505 is enjoying its new toy: ServHelper is being actively developed.

“New commands and functionality are being added to the malware in almost every new campaign,” Proofpoint researchers noted.

TA505, a well-resourced organized cybercrime ring, is known for ongoing malware authoring and development, with everything from fully-fledged backdoors to what seems like beta-stage code making appearances in its campaigns. In this case, ServHelper is unlikely to be a flash in the pan.

“Threat actor TA505 is both consistent and prolific,” Proofpoint researchers said. “When the group distributes new malware, it may be a blip (like Bart ransomware, which was only distributed for one day in 2016) or like Locky ransomware it may become the dominant strain of malware in the wild. We will continue to observe the distribution of these three malware variants but, at this time, they do not appear to be one-offs, but rather long-term investments by TA505.”

They added, that also extends the trend that emerged in 2018, in which threat actors increasingly focused on distribution of downloaders, information stealers, RATS and “other malware that can remain resident on victim devices for far longer than destructive, smash-and-grab malware like ransomware.”

To the latter point, it’s worth noting that TA505 was responsible for hundreds of Dridex campaigns beginning in 2014, in addition to the massive Locky campaigns that came later. In all cases, hundreds of millions of malicious messages were distributed worldwide.