One-third of respondents in a new poll said that have been a victim of fraud or identity theft in the past.

As National Fraud Day approaches (Nov. 11), it remains clear that more consumer education is required when it comes to thwarting scammers and identity thieves. Despite almost half of U.S. consumers (49 percent) believing their security habits make them vulnerable to information fraud or identity theft, 51 percent admit to reusing passwords/PINs across multiple accounts such as email, computer log in, phone passcode and bank accounts.

That’s according to Shred-it’s Consumer Fraud Awareness Survey, which polled 1,200 adults in the U.S. Interestingly, despite stereotypes that older Americans aren’t as tech-savvy as other groups, the survey found that Baby Boomers (47 percent) are the least likely to reuse passwords/PINs. More than half of Millennials (55 percent) and Gen Zs (61 percent) admit to reusing their credentials across accounts. 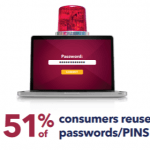 The report also looked into fraud awareness, and found that one-third of respondents (39 percent) said they have been a victim of fraud or identity theft in the past. When asked how they found out they were a victim of fraud, 33 percent found out by monitoring their own accounts for suspicious activity, 29 percent were alerted by a business about a security breach of their information and 24 percent discovered it by accident.

Even so, nearly three in 10 of polled consumers (27 percent) said that they don’t know how to find out if they’ve become a victim; and one in five consumers (20 percent) admit that if they became a victim of fraud, they wouldn’t necessarily know how to report it. 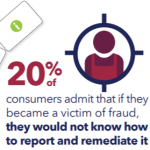 And finally, the study also found people generally don’t trust companies to keep their personal information safe. Forty-three percent of consumers believe the personal information they share with brands and companies today could be vulnerable to a security breach. And another 40 percent said they would stop doing business with a brand or company if they previously suffered a security breach.