There was a 36 percent increase in email attacks against businesses between the first and second quarters of 2018, with retail, healthcare and government experiencing the most business email compromise (BEC) attempts, according to a new report. Several trends emerged in the analysis period, including management landing more in cybercrime’s cross-hairs, and big spikes in email fraud.

While non-management and low-level management employees are most often targeted inside organizations, executives are over-represented when it comes to relative targeting. 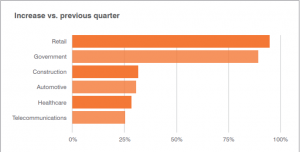 Email attacks surged in some categories.

However, this still “a disproportionately large share of attacks” for upper management, given how few executives there are compared the total workforce.

“With information about employees widely and freely available, they can find multiple ways inside your environment,” according to the report.

“By its nature, email fraud targets specific companies and recipients,” the report noted. “It works by impersonating someone the recipient knows and trusts. The attacker may request a wire transfer or sensitive information. In either case, the order looks like an everyday business request.” 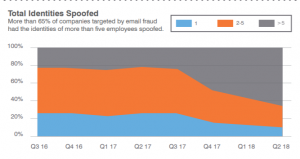 Further, more than 65 percent of companies targeted by email fraud had the identities of more than five employees spoofed. That’s more than triple the proportion in the year-ago quarter, suggesting that fraudsters are getting more creative and finding new ways to target victims.

Other notable data points include the fact that ransomware rebounded during the study period, accounting for nearly 11 percent percent of the total malicious email volume after falling sharply in previous quarters from its top 2017 perch. 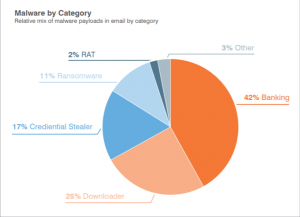 Ransomware rebounded in the summer.

And finally, domain fraud, where attackers use “lookalike domains” to establish trust and carry out email fraud, credential phishing, counterfeiting and more, disproportionately affect U.S. consumers, the report found. Nearly two-thirds of targeted companies saw some level of abuse of their domains, including fraudsters sending attacks that spoofed the recipient’s own employer.

Messages that threaten people to ‘vote for Trump or else’ are part of foreign adversaries’ attempts to interfere with the Nov. 3 election, according to feds.