With DoubleClick, Analytics and AdWords under its belt, Google continues dominating when it comes to global data collection for advertising, a new report found.

When it comes to data collection, Google’s combined arsenal of advertising tools and services continue to help it dominate at a global level. Close behind are AOL Advertising, Moat and AppNexus. Each are singled out by researchers in new report that brings to mind the privacy-busting quote, “If you’re not paying for the product, you are the product”.

Google’s data dominance is tied to the fact it owns the advertising service DoubleClick, which like other popular trackers collects data about internet users for advertising purposes, in order to glean vast amounts of information from consumers, from their hobbies and habits, to IP addresses and more.

DoubleClick was acquired by Google back in 2008, and later rebranded and merged with Google’s own advertising ecosystem. A new report from Kaspersky shows that the advertising service continues to hold substantial lead when it comes to data collection across various countries.

“As we saw from the statistics, tech giants that collect and analyze data to show us targeted advertising are present practically everywhere in the world,” according to a Wednesday SecureList report by Kaspersky’s Anna Larkina. “And it is these companies that store the most data about people from all over the planet.”

In order to analyze various advertising tools, researchers collected anonymous statistics between September 2018 to September 2019 from the Kaspersky Do Not Track (DNT) service.

“Why is it important for marketing and advertising agencies to know so much about us? Simple. The more data they have on us, the more accurately we can be assigned to a particular consumer group,” Larkina wrote. “And the more nuances about the consumer group are known, the more precisely and efficiently it can be targeted with advertising or new products that meet (or anticipate) its needs.”

With the combined force of DoubleClick as well as other trackers within its advertising network, Google “can be considered right now as the world’s largest harvester of global user data,” said Larkina. 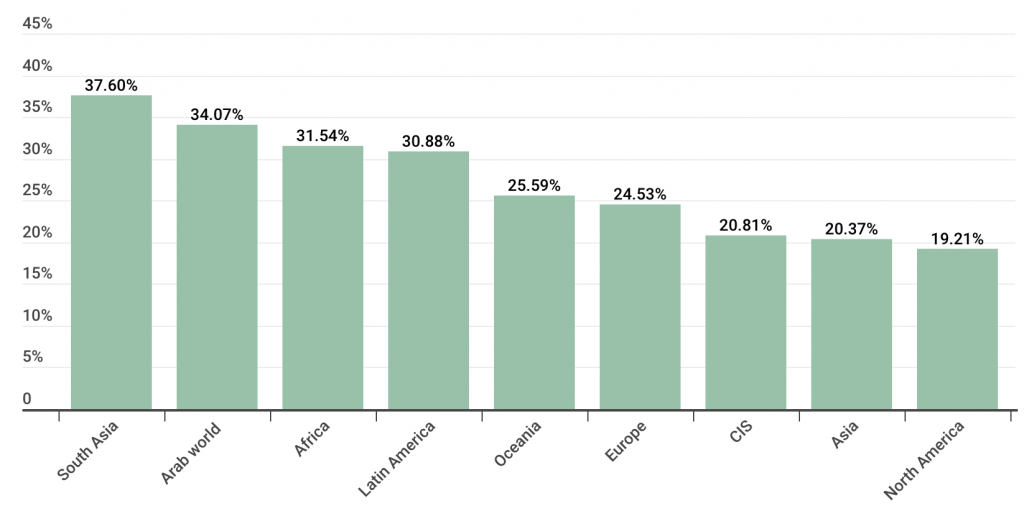 Google also has other trackers under its belt, including Google Analytics, which collects and provides visitor stats to site owners; Google AdWords, which offers services around placing ads; and Google AdSense, for those who sell ads on their own sites. 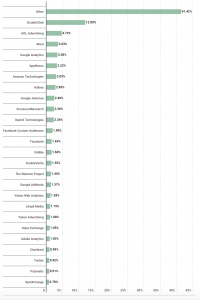 Google has the largest presence right now in South Asia (with 37.60 percent share of its regional tracking services) and the Arab World (with 34.07 percent). Other regions where Google’s trackers have most frequently been spotted include Africa, Latin America and the Oceania (Australia, New Zealand) regions.

Interestingly, Google has a “relatively small share in North America” (though it is still the top tracker in the country) due to the presence of other large-scale trackers in that local market, such as AOL Advertising  and Moat, said Larkina. The top breakdown of North America advertising trackers is in the graphic to the left.

Larkina said that these stastics can paint a detailed map of which trackers have collected the most data for various regions of the world. “Interestingly, such regions and countries are usually distinctive by their language,” she said. “For instance, in Russian-speaking countries trackers from Russian companies dominate; in China the same goes for Chinese firms, as it does for Japanese, Korean, and Czech companies in their respective countries. A deeper look reveals the connections between some of these regions. For example, the Top 25 list of trackers in Russia features Chinese solutions.”

Other top trackers include online advertising tool AOL Advertising, which is owned by Verizon Media and is part of the Oath Ad Platforms business. AOL Advertising holds the next-biggest share of “tracker triggerings” in North America after Google at 4.72 percent.

In North America, the tracker was found most frequently on msn.com, xfinity.com, aol.com, and weather.com. Other top regions that are targeted in data collection by AOL Advertising including Latin America (3 percent share) and the Arab World (1.91 percent share). 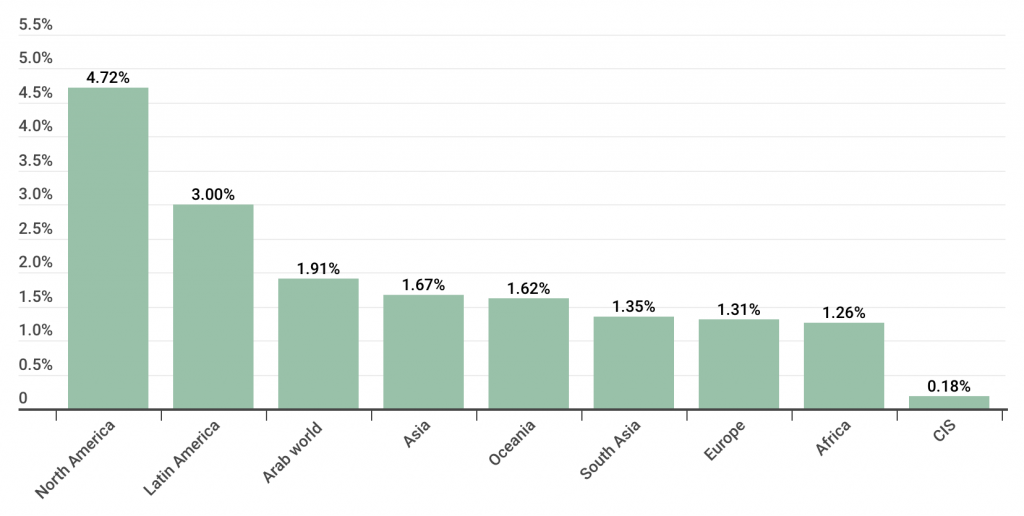 AOL Advertising’s share of triggerings in each of the regions

Another popular tracker is US company Moat, which takes 3.74 percent share of Africa’s top regional trackers spotted and 3.63 percent share for North America. Moat collects and analyzes user data such as heatmap analytics (which tracks cursor movements on an ad or website to identify user behavior), said Larkina.

Moat’s share of triggerings in each of the regions

While some trackers are spread globally, others, like Mail.ru Group trackers, are language based – specifically this tracker is distributed in the Russian-language segment of the Internet. Another tracker often found on Russian-language resources is Yandex.Metrica (from Russian online firm Yandex), which analyzes user behavior and evaluates website traffic.

“The Internet is a common space for all people of the world. Wherever they are, be it Peru, Djibouti, or Germany, most use the same resources,” said Larkina. “The degree of distinctiveness and detachment of certain geographical Internet spaces depends on many factors, for example, the development of a country’s Internet technologies, what languages are spoken there, and how open or closed the government politics and the society in general is.”

In all cases, data privacy continues to be a top worry, especially given the sheer amount of data that companies have when it comes to internet users’ online behavior. For instance, privacy concerns heightened when a report revealed that Google services tracked customers’ movements for advertising purposes (even when they opt out), or when Twitter acknowledged that user phone numbers and email addresses gathered on its platform may have been used to sell ads, and

“On the one hand, data collection and analysis means that we are shown content and products of interest to us, and vendors get to improve their offerings based on user experience (UX),” said Larkina. “But on the other, the idea of all our online actions being harvested and used to supplement a profile that some company has on us is not overly pleasant.”