Mobile apps on BYOD handhelds tend to keep enterprise security pros worried. Between apps that are malicious, others that leak data and ones with pushy permissions – it’s hard to determine what’s safe and what might violate company rules. 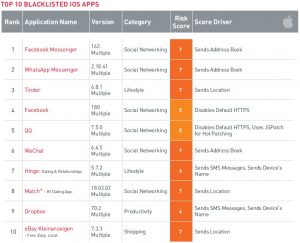 “This quarter, we continued to see enterprises being exposed to data leakage and privacy risks from many commonly used apps, particularly chat apps,” Jill Richards, head of marketing for Appthority, wrote. 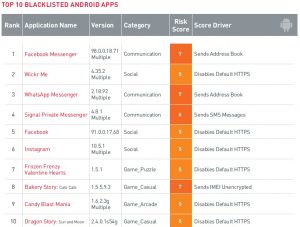 Appthority said both Waze and Telegram were new to the list compared to last year’s roundup. Apps were dinged, according to Appthority, because they were caught sending address books and sending SMS messages and disabling default HTTPS encryption.

“For iOS, apps scored in the data leakage range for sending the device name, in the vulnerability range for using JSPatch for hot patching (which is no longer allowed in apps on the App Store) and in the suspicious range for accessing location,” report authors wrote.

iPhone Bug Allowed for Complete Device Takeover Over the Air