In parts of the developing world, dissidents and journalists face hostile governments and other threats — and mobile is their only access to the internet.

The Tor privacy-focused browser has launched an official app for the mobile web for the first time, with a trial version of a client now available for Android devices.

In an alpha release, the onion network is offering what Tor said is “on par with Tor Browser for desktop” when it comes to user privacy. That’s a boon especially for those users around the world whose only internet connection is via a mobile phone; many less-developed and emerging-economy countries and regions lack the infrastructure to provide traditional wired internet access to people’s homes or places of business.

According to a November 2017 report from comScore and Statista, 70 percent of internet users in India access the web exclusively via mobile devices – and 67 percent do so in Indonesia. These numbers are representative for many other regions across Asia and Africa, said the measurement firms – where dissidents and journalists often deal with hostile governments. 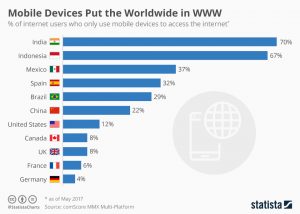 “In many parts of the world, people only access the internet using their phones,” a Tor spokesperson told Threatpost. “But the same threats exist: users are tracked, censored and surveilled, and often with more consequence. We believe everyone should have private access to an uncensored web, so bringing protections on par with Tor Browser to Android is a critical step in protecting privacy, globally.”

When a user starts up Tor Browser for Android, the traffic is relayed and encrypted three times as it passes over the Tor network, which is comprised of thousands of volunteer-run servers known as Tor relays. This provides an array of protections for those living in areas with heavy surveillance and online censorship – and anyone who’s privacy-minded.

Benefits include protection from tracking: Tor Browser isolates each website visited so third-party trackers and ads can’t follow the user, and any cookies automatically clear when the person is done browsing. It also prevents anyone watching user connections from knowing what websites they visit.

Also, “Tor aims to make all users look the same, so Tor Browser for Android makes it difficult for you to be fingerprinted based on your browser and device information,” the project said, in an overview of the release. It added, “With Tor Browser for Android, you are free to access sites your local internet service provider may have blocked.”

Users can download the app from Google Play or via the Tor download page. For now, users will also need to install the Orbot proxy application, which connects the app to the Tor network – Tor said that the goal is to eliminate the Orbot requirement in the future.

Orfox, a third-party mobile browser developed by the Guardian Project that routes Android traffic over the Tor network, will be sunsetted with the stable release; however, users will still be able to use Orbot to route traffic from other apps on Android over Tor. Meanwhile there remains no official Tor Browser for Apple iOS devices, but the project recommends Onion Browser, developed by Mike Tigas.

The stable release for Tor for Android is slated for early 2019.

The project also noted that it’s looking for feedback on bugs and flaws.

“This is our first version of Tor Browser for Android, so there may be more bugs than usual,” Tor noted. “If you find a bug or have a suggestion for how we could improve these changes, please let us know…We track all Tor Browser for Android related issues with the tbb-mobile keyword in our bug tracker, and are happy with bug reports, there, too.”