Tor Project developers partnered with the Guardian Project to release the first iteration of the app last December. It’s essentially an Android compatible fork of the Tor Browser repository that uses Orbot, a proxy app that acts as an instance of the Tor network.

The latest update to the Orfox, pushed in August but not announced by the Tor Project until Tuesday, brings the Tor Browser’s security slider feature into the fold.

The Security Slider feature app lets users decide how tightly reined in they want their mobile browsing experience to be. Users can elect to disable JavaScript on all sites or just non-HTTPS sites, make all HTML5 audio and video elements tap-to-play, or disable all fonts, icons, symbols, and images depending how concerned users are of their security. 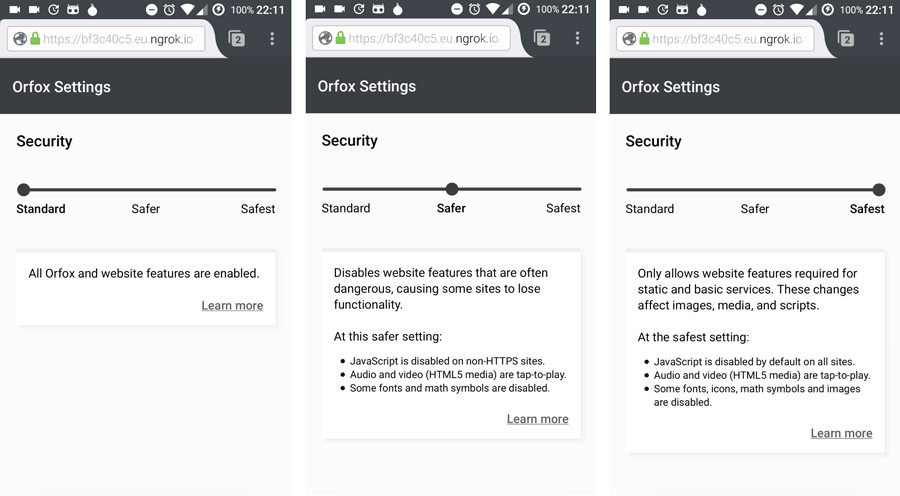 Adapting the slider to Orfox didn’t come easy. Developers had to redesign the app’s security settings and overhaul the slider’s UI to work on a mobile app. The project took roughly four months and another four months to find its way into the app.

Developers said adding the feature to the app helped them better embrace UX best practices, something that should factor into future Tor Project projects.

“This was the first time Tor did a full development cycle following UX best practices, such as being involved with the conceptualization of the UI and performing user testing to validate our hypothesis,” Isabela Bagueros, a Tor project manager, wrote Tuesday. “Since we don’t collect data on user behavior, we had to build a testing methodology so our community could help us perform these tests with our users. We are now applying UX best practices to all of our development cycles.”

The Tor Project initially partnered with the Guardian Project, a collective whose goal is to develop open source mobile security software, to better help users in heavily oppressed or censored regions of the world access the internet. The app initially began as a Google Summer of Code project but has gone on to be installed by between five million to 10 million users, according to Google Play.

Users can download the latest version of the app via Google Play, download the APK installation file via the Tor Project’s git repository, or via F-Droid’s catalog of Android apps.