Analysts warn that the attack group, now known as ‘Earth Centaur,’ is honing its attacks to go after transportation and government agencies.

They’ve been an active threat group since 2011, but a recent uptick in activity from Earth Centaur – previously known as Tropic Trooper – aimed specifically at transportation and government agencies is setting off alarm bells among experts.

The analysts were able to attribute the new Earth Centaur activity to Tropic Trooper after finding similar code in configuration decoding, they reported.

“Currently, we have not discovered substantial damage to these victims as caused by the threat group,” Trend Micro’s analysts explained. “However, we believe that it will continue collecting internal information from the compromised victims and that it is simply waiting for an opportunity to use this data.”

“Depending on the target, it uses backdoors with different protocols, and it can also use the reverse proxy to bypass the monitoring of network security systems. The usage of the open-source frameworks also allows the group to develop new backdoor variants efficiently. ”

Typically, the threat group breaches the target systems through a vulnerable Exchange or Internet Information Services (IIS) server, followed by dropping backdoors like ChiserClient and SmileSvr, the report said. Trend Micro detailed the intrusion stages in the chart shown below. 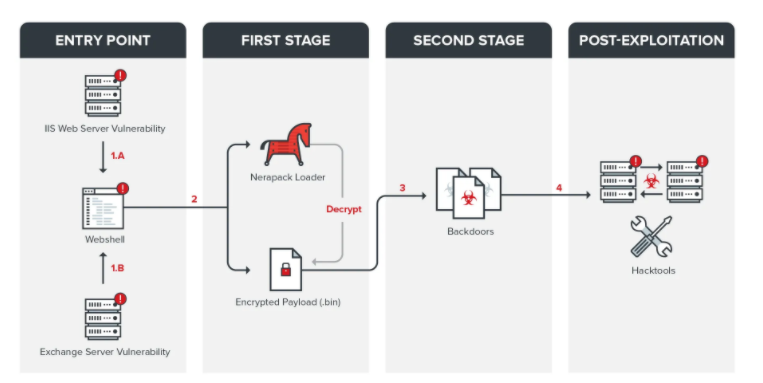 From there, a custom version of Gh0st RAT sets out to gather data from active sessions on the host, according to the researchers. After that’s done, the attackers move through the compromised organization’s intranet and exfiltrate valuable data.

“We also observed that the group used multiple legitimate tools to dump credentials on compromised machines,” the report added. “It made good use of these tools to achieve its goal and keep its operation hidden and unobstructive.”

Tropic Trooper/Earth Centaur has also developed its own, bespoke tool for cleaning up its tracks that deletes event logs on the targeted computer.

Tropic Trooper “uses backdoors with different protocols, which are deployed depending on the victim,” Trend Micro’s researchers found. “It also has the capability to develop customized tools to evade security monitoring in different environments, and it exploits vulnerable websites and uses them as C&C servers. ”

Billions in cash are about to flood the transportation sector by way of the government, and Earth Centaur appears perfectly poised to cash in.