The “bestiary” houses six historical threats that combined resulted in at least $95B in damages worldwide.

Malware as high art? Stranger things have happened, but a Windows laptop infected with six high-profile pieces of malware (think WannaCry and BlackEnergy) is nonetheless looking to fetch more than $1 million in public art-auction bids.

A project called “The Persistence of Chaos,” mounted by artist Guo O. Dong with help from the Deep Instinct security firm, consists of an old Samsung Blue Netbook from 2008, running Windows XP SP3. It features six pieces of malware that together are responsible for at least $95 billion in financial damages.

In addition to WannaCry (responsible for a mass ransomware attack in 2017 that people are still shell-shocked from) and BlackEnergy (the destructive code behind the Christmas power outage in the Ukraine), the laptop has expressive infections like the Dark Tequila malware (a sophisticated credential-stealer first spotted in 2013, known for its cocktail of highly targeted and effective attack modules).

It also features some blasts from the past, like two email worms: the ILOVEYOU worm that made waves in at the turn of the millennium in 2000 (remember that?), and the SoBig trojan, from 2003. And, it houses the MyDoom DDoS/file destructor worm that caused a lot of headaches for the federal government back in 2009. 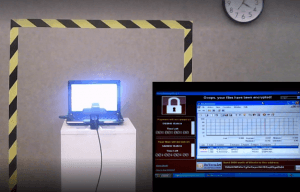 The Persistence of Chaos

Dong, speaking to VICE, called the project a “bestiary, a catalog of historical threats.” He added, “it’s exciting to see the beasts in a live environment.”

The Persistence of Chaos machine is airgapped for safety – and though there are pioneering ways to get around that protection, Dong hopes that won’t prevent art aficionados from bidding to own the very, very sick laptop – to the tune of seven figures. The reserve bid for the computer is $1.13 million.

“These pieces of software seem so abstract, almost fake with their funny, spooky names, but I think they emphasize that the web and IRL [in real life] are not different spaces,” Dong told VICE. “Malware is one of the most tangible ways that the internet can jump out of your monitor and bite you.”

Bids for the piece are open now.