Adobe has issued patches for 87 vulnerabilities on Patch Tuesday – the bulk of which exist in Adobe’s Acrobat and Reader product.

Adobe has issued patches for critical flaws across its Adobe Flash Player and Acrobat Reader products, which could enable arbitrary code execution.

Overall, the company fixed 87 vulnerabilities across Acrobat and Reader, Flash Player and Adobe Media Encoder as part of its regularly-scheduled updates this month. Adobe said that it is not aware of any flaws being actively exploited at this time.

“Adobe has released security updates for Adobe Acrobat and Reader for Windows and macOS,” Adobe said on Tuesday. “These updates address critical and important vulnerabilities. Successful exploitation could lead to arbitrary code execution in the context of the current user.”

Below are impacted Acrobat and Reader versions. Users are urged to update to the latest versions of the products, with the priority update rating “2,” meaning the update resolves vulnerabilities in a product that has historically been at elevated risk. 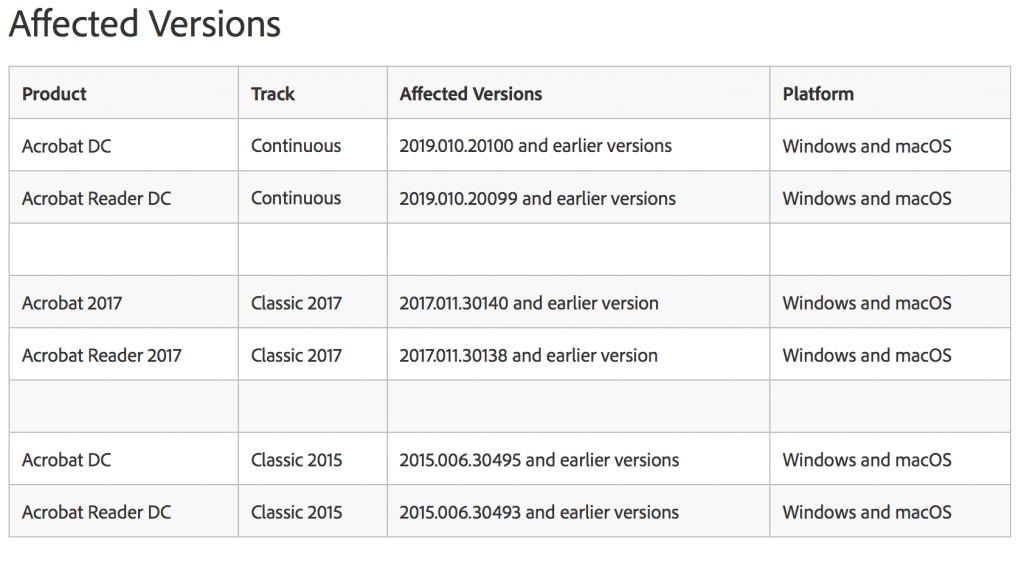 Adobe Flash Player, meanwhile, has a critical use-after-free vulnerability that could enable arbitrary code execution “in the context of the current user,” on impacted systems. The flaw was anonymously reported via Trend Micro’s Zero Day Initiative.

Finally, two flaws exist in Adobe Media Encoder version 13.0.2, a product which allows users to easily encode audio and video in a variety of formats. This product has a critical use-after-free glitch (CVE-2019-7842) which could enable remote code-execution; as well as an important out-of-bounds read information disclosure flaw (CVE-2019-7844). Users are encouraged to update to Media Encoder version 13.1. Mat Powell of the Trend Micro Zero Day Initiative is credited with reporting the two flaws.

“Adobe has released an update for Adobe Media Encoder,” according to the advisory. “This update resolves a critical file parsing vulnerability.  Successful exploitation could lead to arbitrary code execution in the context of the current user.”