A new strain of ransomware is being distributed to Android users via online forums and SMS messages.

Researchers are warning of a new Android ransomware being spread via links in online forums and SMS messages. The malicious links purport to connect back to a sex simulation game, but in reality lead to ransomware that encrypts victims’ files.

“Using victims’ contact lists, it spreads further via SMS with malicious links. Due to narrow targeting and flaws in execution of the campaign, the impact of this new ransomware is limited,” said Lukas Stefanko with ESET in a Monday analysis of the ransomware. “However, if the operators start targeting broader groups of users, the Android/Filecoder.C ransomware could become a serious threat.”

Targets are sent a link to the malicious application, which must be installed manually by victims. After the app is launched, it displays whatever is promised via the posts distributing it – most often, the sex simulator online game.

But behind the scenes, the ransomware is activated, launching command-and-control communication, spreading the malicious messages to victims’ other contacts and implementing an encryption-and-decryption mechanism. 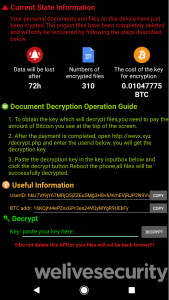 The ransomware encrypts various filetypes – including DOC, PPT, JPEG and others. That said, the malware leaves files unencrypted if the file extension is .zip or .rar and the file size is over 51,200 KB/50 MB. Also, JPEG, JPG and PNG files with a file size less than 150 KB are also not encrypted.

After encrypting victims’ files, the ransomware displays a ransom note in the app asking for a payment in Bitcoin. The ransom note warns that data will be lost after 72 hours, and that the files will not be decrypted even if the app has been deleted.

“It is true that if the victim removes the app, the ransomware will not be able to decrypt the files, as stated in the ransom note,” said researchers. “Also, according to our analysis, there is nothing in the ransomware’s code to support the claim that the affected data will be lost after 72 hours.”

While researchers don’t say how many have been infected, in inspecting one such bit.ly link spread on Reddit, Stefanko said that it had reached 59 clicks from various sources and countries.